The 2023 Chevrolet Corvette Z06 is now rolling off the assembly line, and the YouTube channel Speed Phenom wasted no time strapping one to a dyno.

Speed Phenom drove a Z06 coupe to Dallas, Texas, and straight onto the dyno at Dallas Performance. After multiple pulls, it registered best figures of 610 hp and 419 lb-ft of torque at the wheels. That’s compared to the factory-quoted output of 670 hp at 8,400 rpm and 460 lb-ft of torque at 6,300 rpm at the crank. 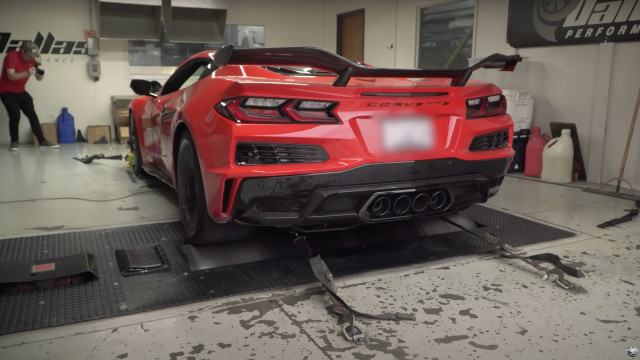 It was an impressive performance considering that power was measured at the wheels rather than the crank, and that the Z06 was dyno tested right after being driven a long distance without any special prep. The car also achieved an estimated 190 mph in fifth gear, meaning the 8-speed dual-clutch transaxle had three gears to go.

Even more impressive is that the Z06’s 5.5-liter V-8, code-named LT6, makes this power through revs rather than forced induction. Sporting double overhead cams and a flat-plane crankshaft, the LT6 is capable of revving to 8,600 rpm, when fuel shut-off occurs. As demonstrated in the embedded video, it does that with a sound that puts modern Ferrari V-8s to shame.

As Motor Authority found in our first drive of the Z06, the LT6 revs freely, which is a good thing for those who want to reach the engine’s lofty horsepower and torque peaks. The LT6 doesn’t make its best torque below 3,500 rpm, but it’s big enough to provide good torque down low anyway, in our experience.

This marvelous engine doesn’t come cheap. The 2023 Corvette Z06 costs $106,395 with destination. But with electrification on the horizon, including hybrid variants of the current C8 Corvette and an electric Corvette likely coming, the automotive world probably won’t see the likes of the Z06 and its LT6 engine again.

‘If your dog died, you need to bring him in and prove …

‘If your dog died, you need to bring him in and prove …

nreal Air AR glasses are the tech gift to get

A look at cruisin’ from the MSC Seascape

How to prevent a cold in 20 seconds – National Hand …

How to cope with the holiday blues

Tanks for watching word of the day is WEST – Enter …

‘Cold Moon,’ last full moon of the year, will shine …

HPD officer in critical condition after crash with …

#ICYMI: League City votes to not spend money on ‘obscene’ …