HOUSTON, Tx. – There’s no doubt #7 is number one with Houston baseball fans, but will Craig Biggio’s admission into the Hall of Fame translate to a financial grand slam? Robert DeNeefe of Sports Collectibles of Houston thinks so saying, “He’ll be more in demand and if you’re in demand, your price goes up.”

While the price for Biggio’s personal appearances may have increased, not all of his collectibles have. Last week, a collection of Biggio’s rookie cards at Sports Collectibles of Houston went for $9.95, and today’s going price was $9.95. Now, that might sound confusing but the reason is as plain as a double off the wall. “His items have gone up probably in the last 10 years already because he was such a great player and people knew he would be in the Hall of Fame,” says DeNeefe. 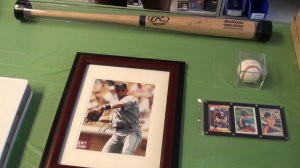 Fan and collector Sean Johnson already has some Biggio items but can’t imagine selling anything. He says,  “I guess more the value is special to me than anything.”

There is one thing that would increase the price of all Biggio memorabilia says DeNeefe, “If he decided for whatever reason that he didn’t want to sign many more things then yes, the existing ones would go up.”

HOUSTON (CW39) - Just like many events in 2020, this year's Super Feast looks much different than it did in previous years. Instead of having thousands of people inside the George R. Brown Convention Center, the 42nd annual Super Feast is a set up in a Grab 'N Go format.

People started lining up to receive food well before 5:00 a.m. on Thanksgiving Day. Food distribution started at 10:00 a.m. The drive through line starts at the corner of Chartres Street and Walker Street on the back side of the convention center. The walk up line is at the front of the building.

HOUSTON (CW39) Thanksgiving will be so different for a lot of us. Many hope to gather in smaller than usual numbers, to keep safe during this Pandemic. And, with social distancing being encouraged, more people are expected to be cooking from home. For some, it may be their first time cooking the Thanksgiving meal.

Last year, over 1,700 home cooking fires occurred on Thanksgiving Day, around the country, according to the Consumer Product Safety Commission (CPSC). And, No wants that to happen again.

HOUSTON (CW39)- We are nearing the end of the 2020 hurricane season and it's a sigh of relief for a lot of us as it's been a record breaking storm season. Aris Papadopulous, an author and a resilience expert is passionate about educating people on the importance of strengthening our homes.

He founded a non-profit called the Resilience Action Fund to help increase awareness and education on the matter.