HOUSTON – A body believed to be that of a deaf woman who hasn’t been seen since late last month has been found.

Tim Miller, the Director of Texas Equusearch, says, “The last time Mrs. Rivera was actually seen was on the (October) 27th. The family reported her missing and HPD contacted us. We talked to HPD and we thought it would be in our best interest to start a search this morning.”

About 40 people showed up at the Mission Milby Community Center on Broadway Street to help Texas Equusearch look for Elizabeth Rivera. They started by driving ATV’s along nearby train tracks. 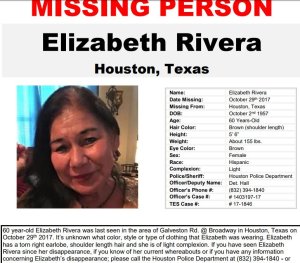 “We know where she was last seen. We know she used to hang out down at the Sellars Brothers with friends and we felt this would be a good place to start and literally in less than 10 minutes we found the remains that certainly appear to be those of Mrs. Rivera.”

Search crews say Rivera had been at a Sellers Brothers grocery store the day she went missing.

“She lives very close to here. She was deaf and on disability and she would go hang out with her friends and stuff since she didn’t work.”

What happened after that remains a mystery.

“She was actually found back behind some bushes near a mattress and there’s an old truck bed back there that we located her in. I wouldn’t think she climbed in there by herself but again this is up to HPD homicide to do their investigation.”

It appears the body had been there for some time. Investigators are working to find out how it got there.

Grassley a ‘no’ on Graham’s 15-week abortion ban

Grassley a ‘no’ on Graham’s 15-week abortion ban