UPDATE – A controversial quote placed on the wall at the performing and visual arts department at Gregory Lincoln Middle School has been scrubbed away and replaced with a new one.

A new quote has been painted to adorn the hallway at Gregory Lincoln, attributed to Nobel Prize laureate Malala Yousafzai. Children at the school this year will be reading Malala’s book, “Malala’s Magic Pencil.”

A new quote is now adorning the hall at Gregory-Lincoln Education Center, attributed to @NobelPrize Laureate @Malala Yousafzai. Third-graders at the school this year will be reading her book, “Malala’s Magic Pencil.” pic.twitter.com/40jfC6JzOo

HOUSTON – It’s gone now, but a quote placed on the wall at the performing and visual arts department at Gregory Lincoln Middle School caused all kinds of push back.

The controversial quote read, “The more you act like a lady, the more he’ll act like a gentleman.”

People wasted no time and jumped to Twitter criticizing it calling the quote sexist, misogynistic, and discriminatory.

“The Houston Independent School District acted swiftly to remove a quote at one of our schools that does not support our values. The input of our community is invaluable, and we appreciate that this was brought to our attention.” 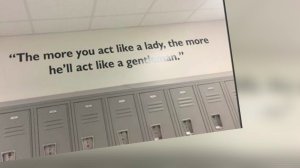 Beckman told CNN Saturday that her children attend school in the Houston Independent School District but not the school where the quote was displayed. She saw the photo on a friend’s Facebook page and asked permission to share it.

“As soon as I saw it I was outraged,” she said.

“It’s a bigger problem than just a quote on a wall, it’s how women in this country are treated,” Beckman said. “My goal by posting it to Twitter was to get the school to take it down before any other children saw it.”

Beckman said the school the quote was taken down within 10 hours of her tweeting the photo Friday.

“Why would that be disgusting? I think it’s true in BOTH senses. If you act more like a gentleman, she will act more like a lady. This is to say- if you show nobility, more people will follow suit. I believe people are looking too much into this and CREATING an issue,” Michael Waters tweeted.

A famed former New York madam said she used the quote to guide her “girls” in the 1980s.

The quote has been attributed to Sydney Biddle Barrows, whose arrest in 1984 was national news because of her upscale clients inspired a made-for-TV movie starring Candice Bergen.

In an 1987 interview with the Sydney Morning Herald, Barrows, a descendant of two passengers of the Mayflower and who came to be known in media as “the Mayflower Madam,” said she would tell her workers the quote was a “basic rule that you should always keep in mind.”

The quote was on a wall of the Gregory-Lincoln PK-5 Education Center, according to the Houston Independent School District.

CNN reached out to Gregory-Lincoln school, a combined elementary and middle school, for comment but didn’t get an immediate response.

Pregnant woman learns 1 twin is dead, must carry to July due date

Long term closure on I-69 inbound

HOUSTON (CW39) -- Are you looking for easy, healthy meals to prepare for you and your family?

(NEXSTAR) – As fuel stations in the East run out of gas amid panic-buying after cyberattackers hit the Colonial Pipeline on Friday, the U.S. Consumer Product Safety Commission is reminding drivers just how dangerous improperly stored gas can be.

"Do not fill plastic bags with gasoline," the safety commission said in a tweet Wednesday. The reminder comes as images show desperate drivers lining up at the pumps and some hoarding containers full of gas.

Jones and Deputy Samuel Leonard were shot and killed when they responded to a dog complaint at a home in Eden, Texas. The situation "quickly escalated to gunfire," the Texas Department of Public Safety said.

WATCH: Tamron Hall discusses the Purple Leash project and the relationship between domestic violence and pets

Applications to get $50 off your internet bill open

Teen surfer bitten by shark eager to return to waves despite more than 100 stitches: ‘I felt pretty darn cool once I got bit’

WANTED PHOTO: DNA leads to the identity of a suspect on the run, in a burglary of a home

Study: Houstonians are not getting enough sleep

May 12th Jersey Village job fair could put 300 to work THIS WEEK!