The nation’s fourth largest city…paralyzed by Mother Nature with flash floods and high water, the likes of which the Bayou City hasn’t seen in a long, long time, like Tropical Storm Allison in 2001 and Tropical Storm Claudette in 1979.

But in some areas this one blows them all out of the water– it’s being called a once-in-500-years-flood!

Airports, colleges and schools, public transportation and government offices…all shut down as Harris County received 5 to 10 inches of rain in just six hours! 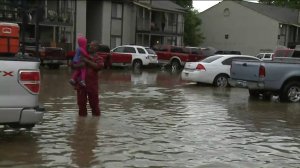 Most of the area remains in a flash flood watch until Tuesday morning.

Some areas in Waller County reported as much as 20 inches of rain overnight!

Dramatic lightning strikes were blamed for multiple fires and for knocking out power to thousands in other areas.

As H-town went into emergency mode, Houstonians were told to stay off the streets if at all possible, but of course that didn’t happen. 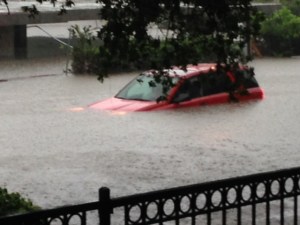 “There are about 94 intersections that are closed because of water,” the mayor announced.

All across the city, the Houston Fire Department performed over 150 heroic rescues in the high flood waters.

Meantime, Congresswoman Sheila Jackson Lee says she’s working on getting Harris County declared a disaster area to receive federal relief and to get Houstonians a break with Uncle Sam to extend the IRS deadline for Tax Day.

Officials are hoping for the best with much lighter rainfall forecasted for Monday evening.

“The good news is most of the heavy rain is sagging to the south,  and we only expect about another half-inch,” Mayor Turner said.

Turner said he knows Houstonians will rise up and help one another through the aftermath of this flood but for now, he hopes everyone will be safe and smart.

“As best as one can, please stay at home…please stay off the streets,” the mayor pleaded.

HOUSTON (NEXSTAR) A wild sheep found in a forest in Australia, named “Baarack” by rescuers, has yielded a fleece weighing more than 77 pounds.

The sheep was found by a member of the public who contacted the Edgar’s Mission Farm sanctuary near Lancefield, Victoria, about 37 miles north of Melbourne.

The next full Moon will be early Saturday morning, February 27, 2021, appearing opposite the Sun in Earth-based longitude at 3:17 AM EST. The Moon will appear full for about three days around this time, from Thursday night through Sunday morning. The moon is commonly referred to as the "Snow Moon".

The full Moon names used by The Old Farmer’s Almanac come from a number of places, including Native American, Colonial American, and European sources. Traditionally, each full Moon name was applied to the entire lunar month in which it occurred, not just to the full Moon itself.

HOUSTON (CW39) Today we're going to see that fog start to build up a very light layer. Thursday that fog actually makes his way out during the morning hours.

By Thursday at 9:30am, that fog starts to build. We'll see some heavier fog in our area Friday. That's when we could see more fog and humidity.

How would COVID-19 vaccine makers adapt to variants of the virus?

$15 minimum wage: Where the debate and alternatives stand