(CNN) — A ferocious hurricane packing 145-mph winds is prompting hundreds of Guantanamo Bay employees to evacuate and threatens to wreak havoc on Haiti and Jamaica.

Hurricane Matthew is expected to dump torrential rainfall on Jamaica and Haiti on Sunday evening before making landfall Monday.

“This rainfall will produce life-threatening flash floods and mudslides,” the National Weather Service said Sunday. “Preparations to protect life and property should be rushed to completion.” 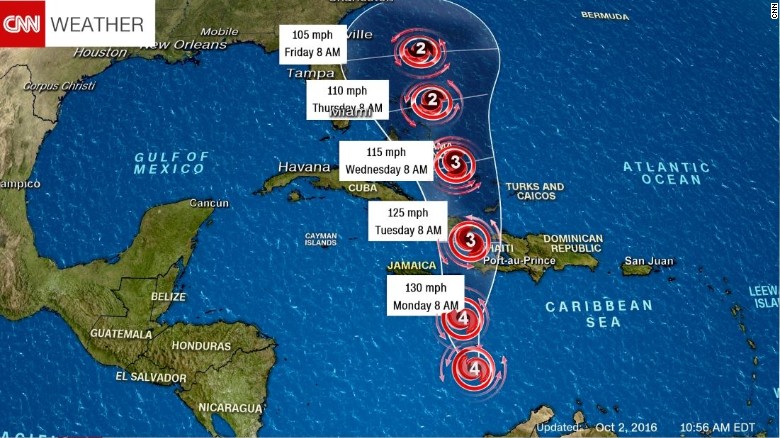 A direct hit on Haiti could be disastrous, with much of the country’s infrastructure still weak after the 2010 earthquake that killed more than 200,000 people. Haiti is also recovering from a cholera outbreak following the quake that killed another 10,000.

“Water systems are at risk as hurricane #Matthew’s approaching,” physician and researcher Keddy Moise tweeted. “Months of work fighting cholera could be lost.”

The storm could also be brutal for Cuba, where many houses appear too weak to withstand a hurricane, CNN’s Patrick Oppmann said Sunday.

As for the United States, “it is too early to determine if Matthew will directly impact the U.S.,” the National Weather Service said Sunday. “But this dangerous storm will be closely monitored.”

The US is moving 700 employees and their families from its naval base at Guantanamo Bay, Cuba, on Sunday. Military planes were to airlift people from the base to cities in Florida. Family pets will join the mandatory evacuations, base officials said.

Those getting evacuated are mostly nonessential personnel. There no plans to evacuate the 61 prisoners detained at the facility that holds terror suspects.

“Remaining personnel and their families will be taking shelter in their homes or designated locations,” base officials said in a statement.

It’s unclear when the evacuees will be brought back, officials said.

In the next few days, Matthew is expected to dump 15 to 25 inches of rain on southern Haiti, with as much as 40 inches in some areas, the National Weather service said.

Eastern Jamaica, the Dominican Republic and eastern Cuba will get pummeled as much as 25 inches in some areas.

Matthew briefly strengthened Friday night into a Category 5 storm, becoming the strongest hurricane in the Atlantic Ocean since Felix in 2007. But it is now a Category 4 storm, meaning it carries winds between 130 to 156 mph (209 to 251 kilometers per hour).

“Some fluctuations in intensity are possible this weekend, but Matthew is expected to remain a powerful hurricane through Monday,” the National Hurricane Center said.

Bracing for a monstrous storm

In Jamaica, storm shelters opened as the nation braced for its first major hurricane since Gilbert in 1988.

Marcia Forbes, a business owner in Kingston, told CNN she was preparing for a rough couple of days.

She waited in line to fill her car with gasoline, brought in her potted plants and filled her bathtub with water in case service gets interrupted during the storm. She also placed sandbags against the shutters of her multimedia company and covered her office computers with plastic.

“Having lived through Hurricane Gilbert in 1988, I know what a Category 3 hurricane can do, (much) less a Category 4 or 5,” she told CNN.

“Everyone in my community is taking this hurricane seriously and getting their homes shuttered up.”

After pummeling Jamaica and Haiti, Matthew could slam Cuba, the Bahamas and South Florida later this week, forecasters said.

Although weather models show just the outskirts of Matthew just scraping the southern part of Florida, Rick Knabb, director of the National Hurricane Center in Miami, urged Floridians to prepare and buy supplies.

IBC Airways has canceled all flights Monday to and from Guantanamo Bay because of the approaching storm.

The US State Department issued a travel warning Sunday, urging citizens in Haiti to leave quickly if they can.

“Given the approaching hurricane, there is limited time available for a safe departure,” the State Department said.

“We recommend US citizens depart Haiti if possible and work with commercial air carriers to leave prior to the arrival of the hurricane. Airports will close once conditions deteriorate and safe travel is not possible. “