How hot is too hot? No, she is not part of the “epidemic” of young teachers having inappropriate relationships with young students — this Atlanta teacher clearly looks as if she can get any grown man she wants —  but is her attire “inappropriate” for the young boys who may be swooning over her in the classroom?

Ms. Brown is young, beautiful and voluptuous in a “Nicki Minaj” type of way, and doesn’t mind strutting her virtual stuff for her Instagram fans.

But while her sexy bikini pics are clearly not for the little ones to see, some feel her form fitting dresses may be a bit of a distraction for “Little Johnny” who is supposed to be learning math and science. The topic has been dominating morning drive times for radio listeners and is a hot topic on the Internet and social media.

Would you want your kid to be taught by Brown? pic.twitter.com/9fL4qsLsKQ

Because of all the attention, Brown has changed her Instagram account , where she goes by the name of Paris Monroe, from public to private.

While some criticize, others are coming to her defense and are sounding off using the hashtag #teacherbae.

A black woman is born w/ curves & is discriminated/sexualized, a white woman BUYS those same features and its ‘trendy fashion’ #teacherbae

We took a gander at some of the photos posted by KBXX 97.9 the Box, and when she’s in the classroom, we see no cleavage and her skirts are hitting the proper place at the knee, so are people being unfair because her clothes are hugging her? 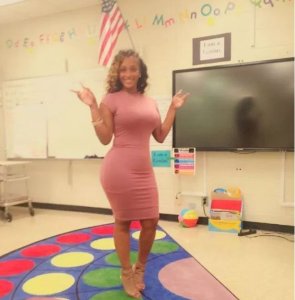 You tell us. And hey, this reminds us of that old “Martin” episode where the comedian lusted over his grade school teacher, “Ms. Trinidad,” who was played by the iconic beauty, supermodel Beverly Johnson.

Constable: Parents arrested for having child at alleged …