HOUSTON- “My concept is street food but we went mobile,” says Saul Obregon.

Obregon grew up in Monterrey, Mexico loving the food sold by street vendors. Now, he’s owns his own truck named La Macro, and is selling his own street food.

But owning a food truck wasn’t his first career. “My background is in engineering- Oil and Gas. After 14 years, I got laid off, during the BP spill. I decided to pursue my dream, and I’d been planning it for five years so I finally decided to get all my money and pursue it,” Obregon tells us. And with a lot of hard work, his dream has come true. 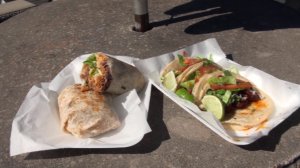 La Macro has been “cooking” for four years, maybe because the menu is unique. “My main thing was to sell Trumbo or al “pastor” and Inside the Loop it’s hard to find it.” Not anymore as La Macro is parked at the Raven Tower – at least for the next few months.

If you’ve never heard of Trompo, it’s meat on a vertical spit with a pineapple on top. And FYI, Trompo is Spanish for “top”.

The most popular dish is The Tacquesa, which are five mini tacos. Second place goes to a MONSTER burger. With 1/3 pound of beef patty, grilled onions, melted cheese, and pork meat on top…the Trumpiburger is La Macro’s signature burger…and belt-busting good.

Really, no matter what you choose off La Macro’s menu you’re in for a treat.