BATON ROUGE -- A sheriff's deputy was killed and a suspect wounded in a shooting in a Baton Rouge barber shop Saturday, Louisiana authorities said. 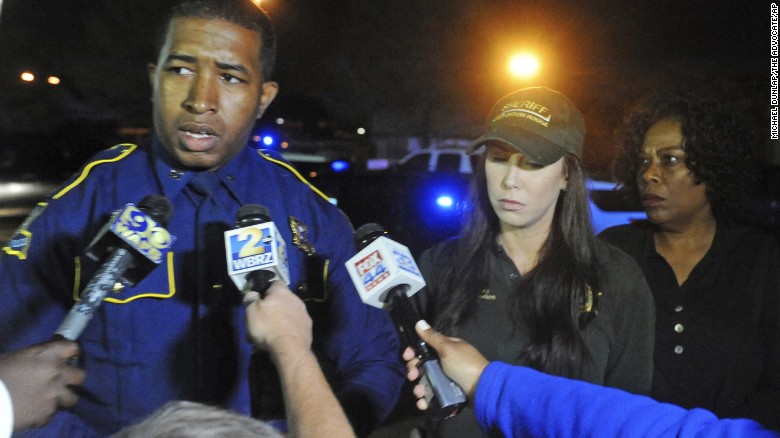 "While inside the business, deputies struggled with the suspect and shots were fired," Gautreaux said in a statement on .

"Our hearts are broken as we grieve for one of our brothers," he said.

The second deputy was not injured. The shooter was injured and taken to a local hospital, Gautreaux said. Their identities were not released.

Anderson was a decorated 18-year veteran of the sheriff's office. Last year he was recognized for delivering a baby on the side of a road, the sheriff's statement said.

That night "took the cake" in his career, Anderson told the Baton Rouge newspaper The Advocate.

"You put me in an active shooter situation, I'm there. I know exactly what to do," Anderson said. "Nothing really rattles me that much, but that was totally outside of my element. That right there, that got me. Thank God everything worked out."

"Such a tragic event last night in Baton Rouge. Donna & I are praying for the family of the @EBRSheriff killed in the line of duty," tweeted Governor John Bel Edwards.

Such a tragic event last night in Baton Rouge. Donna & I are praying for the family of the @EBRSheriff killed in the line of duty. - JBE

This was the second killing to hit the East Baton Rouge Parish Sheriff's Office in nine months.

SPRING (CW39) Residents in the Spring area are going to be dealing with some construction along Kuykendahl Road for a while.

The construction project will widen Kuykendahl Road from a two-lane half-boulevard to a four-lane boulevard from Lake Woodlands Drive to Research Forest Drive. The project design includesconstruction of two 12-foot-wide northbound vehicle lanes from north of Lake WoodlandsDrive to south of Bay Branch Drive with an 8-foot-wide outside shoulder along the newnorthbound lanes. There will be a new bridge constructed over Bear Branch for the northboundlanes that has a shoulder as well as a walkway, mirroring the existing bridge. The two existinglanes will become the southbound lanes once construction is completed.

Have you seen this teen?