WASHINGTON, D.C. – President Trump and Republican members of Congress are playing defense on their proposed tax reforms. The framework of their plan was unveiled earlier this week, but administration officials are already trying to stop people from analyzing it.

“The bill is not finished yet,” said White House Budget Director Mick Mulvaney Sunday during an appearance on CNN’s State of the Union. “Keep in mind what we introduced this week is the framework, a basic agreement between the White House and Senate leadership.”

House Speaker Paul Ryan reinforced that point in an interview with CBS’ Face the Nation. “Within the framework of this bill are many of the decisions that have to be made,” said Ryan. “The reason we did it this way is, unlike health care, we wanted to make sure that everyone was on the same page with respect to the House and the Senate and the White House.”

Mulvaney argues that it’s premature to draw any conclusions from the framework, because of all of the important details left for Congress to figure out. “It is impossible to sit down and say this will be impact on this wage earner or this family at this particular time,” said Mulvaney.

However, that’s exactly what President Trump and Republican leaders have been doing. During his weekly address to the nation, Trump touted the reform plan as a boon for Americans. “First, we will cut taxes on all working American families,” said Trump. “People will pay a lot less money.” Meanwhile, during his appearance on Face the Nation, Ryan defended the plan, saying “the entire purpose of this is to lower middle class taxes, so yes, people are going to get tax cuts.” However, a recent analysis of the plan shows a much different story.

According to the non-partisan Tax Policy Center, most of the savings from the tax plan would go towards wealthy Americans. Its analysis finds that half of the savings go to the top 1 percent of income earners in America, who would see an 8.5 percent increase in their after-tax income. On the other side of the coin, the bottom 80 percent of earners would see a much lower increase, between 0.5 and 1.2 percent. 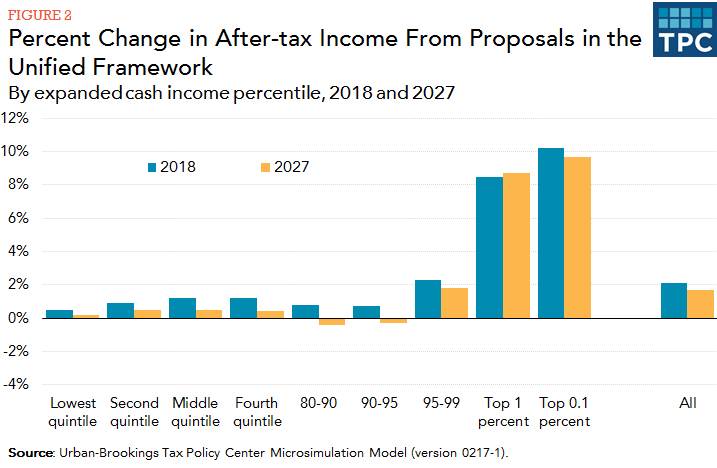 The Tax Policy Center’s analysis portrays an outcome that is the exact opposite of what President Trump claims will happen under the plan. “Tax reform will protect low income and middle income households, not the wealthy and well-connected,” said Trump when the plan was announced earlier this week. “I’m doing the right thing and it’s not good for me, believe me.”

It’s hard to believe Trump because it’s so easy to see the ways he would benefit from the plan. All it takes is a quick look at his tax documents. While Trump hasn’t released any of his tax forms, a few pages of his 2005 return have been made public. Running those numbers through the GOP framework reveals big savings for the president and his family.

Trump paid more than $31 million dollars in alternative minimum taxes in 2005. However, the Republican tax reform plan eliminates the tax, which was designed to prevent wealthy Americans from using a large amount of deductions to game the tax system and pay little to nothing to the government. Without the alternative minimum tax Trump would have paid only about $5.3 million in taxes, even though he had more than $152 million in total income.

Trump would also save millions of dollars because his business income would be taxed at a much lower rate and his family would pay much less to the government after his death because of the elimination of the estate tax.

No matter how many times Trump and Republicans say the plan will benefit the middle class, it’s clear that the numbers don’t lie.

President caught on hot mic: ‘No one f—- with a Biden’

Highs for the week ahead

Tanks for Watching word of the day Oct. 5 is CONVENIENT

Biden: ‘It’s going to take years’ for Florida to …

Woman killed in auto-ped accident in The Woodlands