The storm is expected to pack a punch. As strong winds blow up the coast, residents could be in for a potential nor’easter, according to the National Weather Service.

Warnings are in effect for some areas beginning as early as 7 a.m. Sunday, lasting until 7 p.m. ET Monday. More than 15 million people are under a warning, CNN meteorologist Julie Martin said. 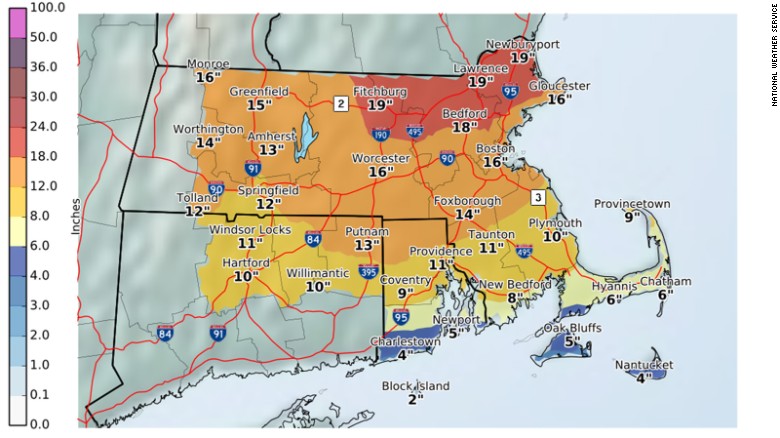 Across the Northeast, residents have experienced a rare weather phenomenon known as “thundersnow” — this is when thunder and lighting occur as snow is reaching the ground.

Who's ready for more #Thundersnow? The setup looks favorable Mon morning for #MA & #RI as a coastal storm intensifies rapidly near Cape Cod!

In order for this to happen, the air layer closer to the ground has to be warmer than the layers above, but still cold enough to create snow, meteorologists explain. It is fairly rare, because ground temperatures in the winter are usually too cold.

Also it is likely that this storm system could undergo another weather anomaly called “bombogenesis.”

“This happens when there is a large difference between a cold air mass and warm sea surface temps. High winds are a product of this and intense precipitation — even blizzards,” Martin said.

The rapid strengthening of a low-pressure system will give way to this, Martin said. “The storm must drop at least 24 millibars within 24 hours for this to happen.”

Heavy snow will pick up pace as the coastal storm moves farther southeast toward Massachusetts and Rhode Island, intensifying near Cape Cod on Monday morning, the National Weather Service said. Wind gusts of 65 miles per hour or more are expected for the coastal region.

In Cape Cod, a blizzard watch is in effect until Monday as temperatures drop below freezing.

Snow accumulations in the warning areas can range from 8 to 12 inches, Maine could see more.

“The snow will be heavy and wet, and winds high — so power outages and downed trees are a concern,” CNN’s Martin said. “It is likely schools will be canceled again.”

In New York City, no snow is expected on Monday, but “gusty winds over 40 mph could lead to a lot of travel troubles to start the work week,” Martin said.

The storm is expected to move out by Monday night.

The West Coast continues to grapple with rapid snow melt and heavy rains in the Sierra Mountains, which led to flooding in parts of Nevada and Southern California last week.

In Northern California, rainfall totals reached a record high in the Bay Area, Napa Vally and Kentfield — the National Weather Service recorded this as the “wettest winter season to date in over 100 years.”

Who's ready for more #Thundersnow? The setup looks favorable Mon morning for #MA & #RI as a coastal storm intensifies rapidly near Cape Cod!

Investigation underway after man died hours after getting COVID-19 vaccine

The Taco Tequila Festival Sweepstakes for May 1 and June 5

HOUSTON (CW39) -- According to the United States Dept. of Justice, car is stolen every 33 seconds U.S. Texas has the second highest motor vehicle thefts in the country, with an average of 77,000 cars stolen annually. It gets worse, because the closer we get to summer the more car thefts occur. It is also important to note that since the pandemic, the FBI says there has been a significant increase in thefts of all kinds. To find out how you can protect yourself, CW39's Shannon LaNier met up with Deputy Chris Gonzales with Precinct 4.

To protect your self even more, consider these extra security measures...