HOUSTON – While most people see the golden arches as just a place for a quick meal, Joseph Pena viewed the fast-food restaurant as a golden opportunity.

The winner was Pena’s “Lone Star Stack”, which features two large beef patties, a smothering of toppings, and of course… Texas toast.

“When I was putting it together on the website, I just did it based off my personal preferences and when I finished it, I realized it was very similar to what my mom would cook for me at home. So really, I feel like I might owe her 5,000 dollars.” Pena says with laughter, “I feel special because it’s like the contest, but it was really like, you know, a family creation.” 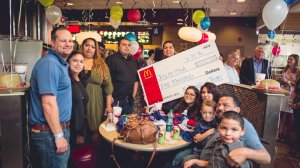 As Joseph enters his local McDonald’s in East Houston, the customers unknowingly sip sweet tea and sink their teeth into his creation.

He reflects on his recent success.

“I’m really not a guy who likes attention or anything like that, but I knew when I won the contest, that this comes with the territory,” Joseph said as he waited for his food.

Pena is a hardworking and humble student at Houston Community College where he maintains his passion for digital marketing.

In his free time, he spends time with his friends and loves video games, but mostly likes to keep his life quiet and focused on his family.

One question we all have is… How will he use the prize money?

“So I put it towards my family. You know, a few bills around the house. Things were a little bit behind. My dad had a few medical bills that needed to be paid… That, and you know, just little stuff here and there,” said Pena.

Joseph exits the restaurant, heading back to his life away from the spotlight. He appears to be nothing but positive.

“People keep saying I might get opportunities or this and that, but whatever comes my way, I’m just excited about having the burger in the store. Anything else is just a bonus for me.” Joseph stated as he was leaving the restaurant.

Dr. Anthony Fauci, in a series of news show interviews, said he expects a decision when advisers to the Centers for Disease Control and Prevention meet Friday to discuss the pause in J&J’s single-dose vaccine.

(NEXSTAR) -- NASA'S helicopter, Ingenuity, rose from the dusty red surface of Mars early Monday morning to become the first aircraft to take flight on another planet.

The 4-pound (1.8-kilogram) helicopter hovered 3 meters above the Martian surface, then touched back down, according to NASA. Exuberant applause and cheers erupted in the operations center in California when success was declared.

CLEVELAND (WJW) -- The CEO of drug company Moderna announced this week that they will make a third booster shot for the two-dose vaccine available by the fall.

Studies show their vaccine is more than 90-percent effective against COVID six months after the second shot, but it's still unclear how long immunity will last.

NASA’s Mars helicopter is set to take history-making flight Monday. Here’s how to watch it