HUNTSVILLE, TX  – There’s a time and a place for everything, even tweets.

Sam Houston State University student Monica Foy caused quite a stir when she sent out a negative tweet about Deputy Darren Goforth, the officer ambushed and killed Friday while pumping gas.

Her tweets questioned why so many people cared about Goforth’s death and suggested that the slain deputy may have deserved to be shot! She also wrote that Goforth had “creepy pervy eyes.” 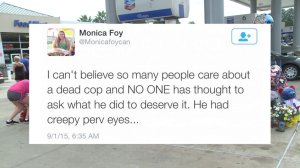 The tweets went viral and Foy soon deleted them. Now, after all of the angry feedback her Twitter and Facebook accounts are deleted. And karma seems to have come even quicker since Foy was arrested at her home on an outstanding Harris County warrant for assault.

Once people angry at Foy started looking her up, it seems they found out she had the warrant.  She’s been released from custody.

Monica’s school, Sam Houston State University in Huntsville is well-known for their criminal justice program so a tweet like this doesn’t sit real well.