CNN — The mayor of a town in suburban Paris appealed for calm Sunday after demonstrations over the alleged rape of a young man by police turned violent.

More than 2,000 people marched Saturday in Bobigny, a suburban town nearly six miles (9.2 kilometers) northeast of the French capital. They chanted and carried signs demanding justice for a 22-year-old man who says he was sodomized by a police officer’s baton. 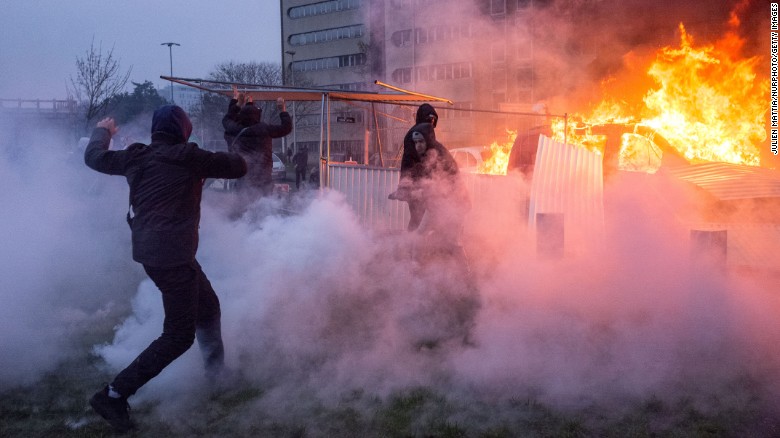 The demonstrations turned violent when a few hundred protesters broke away from the march and began rioting, police said. They smashed windows, set cars and trash cans on fire and attacked law enforcement personnel, who responded by firing tear gas into the crowd.

No one was injured but 37 people were arrested, police said. Several vehicles were set on fire, including a media van for European broadcaster RTL.

At least two local businesses were vandalized, including a supermarket that was also looted. A bus station was also damaged.

The working-class area has been rocked by several days of sometimes violent demonstrations after four police officers purportedly assaulted the young man February 2 at a housing estate in the northern Paris suburb of Aulnay-sous-Bois.

The man, who is black and identified only as Théo, had injuries severe enough to require surgery. The incident has reignited racial tensions between police and immigrant communities in the poorer neighborhoods surrounding Paris, which have occasionally erupted in violence over the past decade. 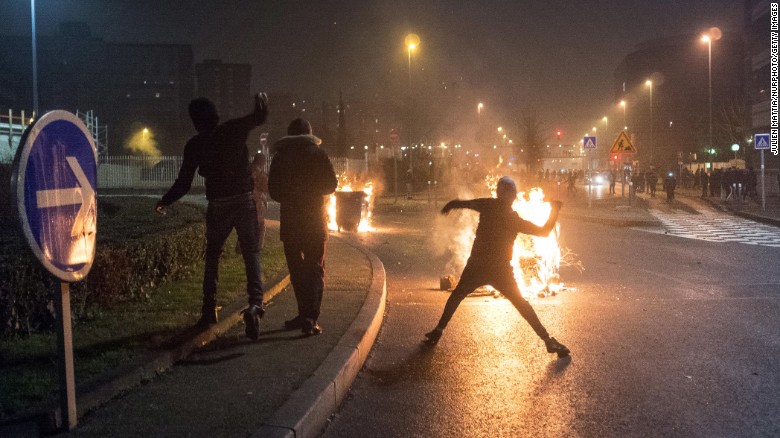 All four officers involved in the incident have been charged with aggravated assault, while one was also charged with rape, according to the Interior Ministry.

The officers have been suspended pending an inquiry into accusations that they used excessive force.

‘It was as if my body had given up on me’

Théo told French television channel BFM that he was walking with his headphones on when he was approached by the police.

“When I realized how violent their tone was, I said to myself, ‘they seem pretty serious.’ So I stood against the wall, and then one of the policemen beat me,” said Théo, adding that the officer then violated him with a baton. 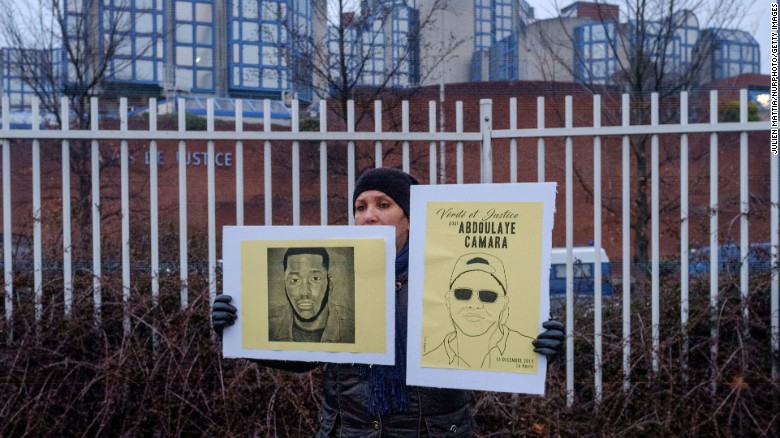 “As soon as he did that, I fell on my belly. I felt weak. It was as if my body had given up on me. Then they handcuffed me.”

People on social media have been sharing images of the young man along with the hashtag #JusticePourTheo.

On February 7, French President Francois Hollande visited Théo at the suburban hospital where he has been treated. In a photo shared by Hollande on Twitter, the President is seen standing at Théo’s bedside. In the tweet that accompanied the photo, Hollande said Théo “reacted with dignity.”

Théo told BFM he has faith in the French justice system and asked that protests remain peaceful.

“I call to calm my city because I love it very much,” he said from his hospital bed. “Violence is not the way to support me. Justice will do its job.”

Friends have described Théo as a fun-loving person and a soccer fanatic who plays at the Institute of Private Football in Aulnay-sous-Bois.

“He is a sociable person who loves to laugh with everyone,” said a man who gave his name only as Hicham, who has played soccer with Théo.

That athleticism runs in the family. Théo’s sister, Aurélie, is a professional handball player on Le Havre AC, a French women’s club.

In an interview with BFM, Aurélie said Théo’s doctors aren’t certain about the long-term impact of his injuries.

League City Police Department officers involved with the Houston Metro Division of ICAC—Internet Crimes Against Children—along with representatives from the National Center for Missing and Exploited Children are partnering to host a “Cyber Safe Parenting 101” class this Saturday, April 17 at 9 a.m. at the Johnnie Arolfo Civic Center, 400 West Walker Street.

As we know, Texas CAN stand the heat -- weather wise. However, Rosalyn's Hot Chicken is not afraid to bring the extra heat to your taste buds.

On April 12, deputies responded to the Circle K located in the 13800 block of Spring Cypress in reference to a theft of lottery tickets.