NEAR HUNTSVILLE, TX– It’s no surprise folks in Texas like to fish. But if Lake Livingston is your favorite spot, it might be time to pull up bait and relocate.

The Texas Department of State Health Services found eating fish from there can mess you up. “Some species of fish had elevated levels of dioxins and PCB’s (polychlorinated biphenyls),” says Chris Van Deusen, spokesperson for the TDSHS. “In fact, elevated enough that they would pose a risk to human health if people were to consume those fish.”

PCB’s are manmade compounds once used in electrical equipment. They were banned back in the 70’s but once deposited, they linger in the environment for years. “PCB’s can have an effect on the kidneys, on the nervous system. Both (PCB’s and dioxins) can be carcinogenic, so they can cause cancer,” says Van Deusen.

The state recommends women of childbearing age and kids under 12 not eat any catfish, freshwater drum or smallmouth buffalo caught in Lake Livingston due to these toxins.

Older women and males 12 and up should limit what they eat there to about one meal a month. And everyone should completely avoid garfish (probably a good plan since their eggs are poisonous to humans).

Striped and white bass caught along the Trinity River are okay to eat with limits. For younger women and kids: once a month. For dudes and older women: three times a month.

Van Deusen adds, “Generally it’s safer to eat fish that are smaller in size (and) have not accumulated as many of these toxins over the years.”

Good news, though:  Van Deusen says Lake Livingston is still safe to visit. “Boating and swimming– that’s not an issue at all. People aren’t going to be exposed to these toxins. It’s really when you ingest fish that have been exposed when you get into problems.” 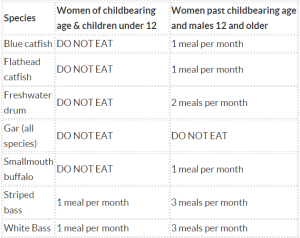 Bear gets stuck, dies inside hot car in Tennessee

Bear gets stuck, dies inside hot car in Tennessee

RI cop on leave after allegedly attacking woman at …

Baby and kid essentials for summertime

RI cop on leave after allegedly attacking woman at …

DATA: How common are abortions in Texas?

Escobar: Women will die because of abortion ruling

Study: Texas is the 10th safest state during pandemic

FREE 4th of July first ever drone light shows in …

59 Diner shuts down after 29 years

Houston food truck has best tacos according to Yelp

Shooting by gun store employee goes to a grand jury

The best hotels in Galveston, according to Yelp