Almost 12 years to the day after her babies nearly succumbed to the hellish aftermath of Hurricane Katrina, Alexandra Wheeler finally got to thank the man she credits for saving their lives.

In the throes of another devastating flood, retired Lt. Gen. Russel Honoré arrived this week in Houston, where Wheeler and her boys put down roots after Katrina’s flood forced them from New Orleans.

Historic rain from the storm known as Harvey left Wheeler’s home unharmed this week. But the storm gave her an opportunity to tell Honoré what he has meant to her and sons, now almost teenagers, since they first encountered each other a dozen years ago.

“We wouldn’t be here if it wasn’t for you,” she told him.

Facing disaster a dozen years ago

It wasn’t Katrina that upended Alexandra Wheeler’s life in 2005. It was the aftermath, when the federal levees broke and Wheeler’s 3rd Ward neighborhood began to flood.

The rain had passed. The heat had returned. But the worst still lie ahead.

“We didn’t even know the levees were broken yet,” Wheeler recalled. “It was just like a spot of water on the ground that looked like just a pipe or something burst.”

“The water went from the middle of the street to the sidewalk, and then it got to the first floor of the house,” she said. That’s when she decided it was time to go.

Wheeler’s main concern was her twin boys. J’Mari and A’Mari Wheeler Reynolds were just 6 1/2 months old. She tried to load them into a stroller, but the current pulled it away. Mom and sons made it across the street to a friend’s fourth-floor apartment. There, they hunkered down with other neighbors, hoping the water soon would recede.

So, in the morning, Wheeler started to make her way through the flood toward the Superdome, the boys strapped to her body in baby carriers — one in front, one in the back.

At one point, something in the murky water caught her foot. Fearing it could be a snake or an alligator, she hesitated. When she lifted her leg, the reality proved worse than what she had imagined.

“It was two bodies, collided,” Wheeler said. “Their arms were stretched out. They were full of water, and they raised up to the top from me lifting my leg up.”

Wheeler kept going. She reached the city’s convention center, which had developed into a makeshift shelter — without adequate provisions — on a sliver of high ground along the Mississippi River.

There — dehydrated, starving and exhausted — Wheeler and her boys waited, she said.

A savior arrives in camouflage

“We hadn’t eaten in, maybe, six days,” Wheeler recalled. “We hadn’t had any water or anything. I ran out of formula and food for them, so they were really hanging on by a thread.”

Desperate, Wheeler and few other people tried to walk from the convention center to Harrah’s casino, just a few blocks away, to find a way out of the city. Instead, they ran into military personnel who, with guns drawn, stopped them. Wheeler was terrified — and confused.

“We’re like, ‘We’re the victims. What are you pulling guns on us for?”” she recalled.

“Put those weapons down, dammit!” he yelled at the troops in a moment now famous for recalibrating the military’s role in the disaster zone from enforcer to helper.

Honoré, dressed in his camouflage uniform, instantly became a savior to New Orleanians desperate for food, water and rescue. To Wheeler, he became the man who saved her boys.

CNN’s Barbara Starr was there in 2005 when Honoré encountered Wheeler and her twins, who by then were lethargic from too little nourishment and exposure to overwhelming heat.

‘We would have died’

“Grab the babies, c’mon!” Honoré said as he took the children from Wheeler and handed them off to soldiers. “C’mon, tiger. Let’s go!”

Honoré walked with the family to a US Coast Guard boat that took them to a Navy ship. There, they bathed and got clean clothes and food.

All told, Wheeler estimated that Honoré spent about four hours with her and her boys, whom he cradled in his arms.

The family was airlifted to San Antonio. At a hospital there, it became clear just how much the babies’ health had deteriorated.

“They were completely dehydrated. Their veins — everything — it was really hard for them to put in IVs,” Wheeler said. “They were there for a week and a half. A’Mari actually coded blue, and then J’Mari went directly after him.”

12 years later, a reunion in Houston 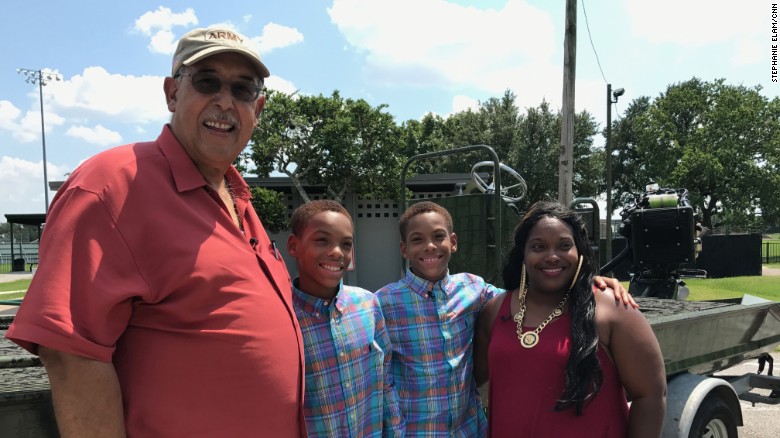 A dozen years later, Wheeler kept one eye on the rain and the other on her sleeping boys as Harvey pushed through Houston. Unlike after Katrina, floodwater only came close to their apartment this time.

When news of Honoré’s arrival in Texas spread, Wheeler messaged him on social media — and he responded. They planned to meet.

When Wheeler’s twins saw the military man this week — their first encounter the boys will remember — they ran into his arms.

“Boy! You guys grew up in 12 years!” the lieutenant general said with a smile.

But Honoré wouldn’t take all the credit.

“I will take that hug, he said, “on behalf of all our military people that were there on the ground as first responders.”

This Day in Black History: The Negro National League was founded