Fires have broken out over two days at a Texas chemical plant flooded by Harvey and more are expected, authorities said Friday.

Officials have decided to let the remaining six containers catch fire and burn out rather than endanger firefighters, the US Environmental Protection Agency and the Texas Commission on Environmental Quality said in a joint statement.

“The refrigeration units have been compromised due to the massive flooding, and therefore, we expect these containers to catch fire similar to the way the first trailer did last night,” the statement said.

Arkema shut down the facility as Hurricane Harvey approached last week. Employees and residents within 1.5 miles of the plant were evacuated as a precaution.

The company makes liquid organic peroxides used primarily in the production of common consumer products, ranging from headlights assemblies for the automotive industry, to PVC for pipes, packaging and siding.

Fifteen deputies exposed to smoke earlier were taken to the hospital and released later in the day, Harris County Sheriff Ed Gonzalez told CNN. Harris said the firefighters experienced a burning situation in their eyes and throats.

The EPA said it tested the smoke with aircraft and performed ground-level air quality monitoring as well. Neither testing method found toxic concentration levels in areas away from the evacuated facility, the EPA said.

Authorities and Richard Rennard, a senior executive with Arkema, said officials thought the 1.5-mile evacuation zone was enough to ensure public safety. Flooding and power loss combined to make portions of the plant in Crosby combustible.

“This played out like we expected it to,” Rennard said. “Product will warm up, degrade and catch fire.”

US Rep. Sheila Jackson Lee of Texas said the EPA should intervene to make sure the numerous chemical plants and refineries in the Houston area don’t pose a threat to the public. “The safety of millions are at stake and we cannot afford to risk another disaster,” she said in a news release.

The rain, mercifully, has stopped in southeast Texas. But a week after Hurricane Harvey, boaters still are shuttling people away from a few high-water areas as millions struggle with what the storm has left — tens of thousands of destroyed homes and altered lives, and grim efforts to find those who may not have survived.

At least 50 people have died from the storm. Other statistics only begin to hint at the scope of the punishing deluge and what the months of recovery will entail:

Why we don’t yet know Harvey’s true toll?

Flooding danger is far from over in places such as Beaumont, Texas, a city of 118,000 dealing with a cruel juxtaposition: inundated in spots with floodwater as its residents lack flowing tap water because two pumps there failed.

“The river … on the east line of our city should crest today, and it will start falling, (but) our biggest situation is the water supply is cut off,” said Capt. Brad Pennison of Beaumont’s fire department.

Gov. Greg Abbott said in a press conference Friday the Neches River’s water level continues to rise, and is nearly 7 feet above the record.

The loss of drinking water has forced an evacuation of patients from Beaumont’s Baptist Hospital. Patients in intensive care already have been airlifted or taken by ambulance to other facilities, but officials still plan to evacuate 85 people — including 11 babies born prematurely and three other newborns — who remained there Friday morning.

Dr. Snehal Doshi, who runs the hospital’s neonatal intensive care unit, said several preemies’ parents had been prevented from visiting their infants because of flooding elsewhere.

“There are some parents who simply haven’t seen their babies for days, just because it’s not safe for them to come to the hospital,” he said.

Thursday night, 600 pallets of water and 400 pallets of meals were delivered, Abbott said, though he didn’t specify where. He said the city is “working aggressively” to repair the water system.

Engineers from ExxonMobil and other companies have been working with government officials to help Beaumont residents get access to water.

Ashley Alemayehu, spokeswoman for ExxonMobil, told CNN’s Brian Todd the teams are working on a “temporary solution” to get water to residents’ homes, but that there were “still a lot of steps that still need to be completed,” such as water treatment.

The city still had no timeline on getting running water to Beaumont residents, Alemayehu said.

“I’m hopeful to take a shower tonight,” she said. 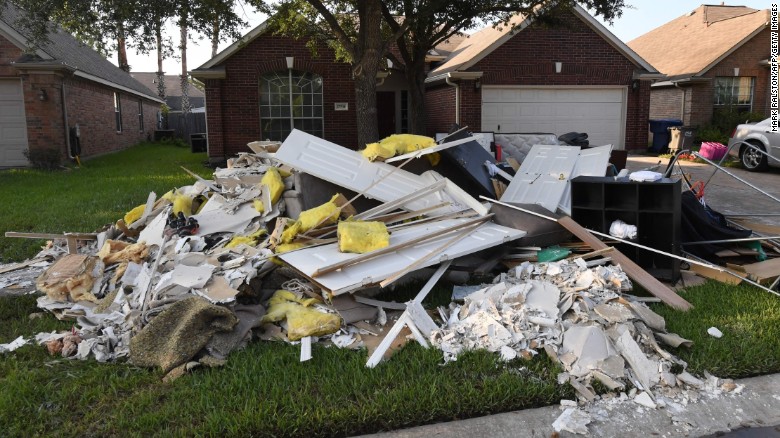 Houston’s mayor, meanwhile, made a public plea to the federal government: Advance money and other assistance quickly. Most of Houston is drying out, and people are starting to pile debris in front of their homes, Mayor Sylvester Turner said.

“We need housing assistance. We need an army of FEMA agents on the ground to be assisting people, not just in shelters, but (also) people who are in their homes, so we can get them financial assistance they need (so) they can start transitioning.”

The rate of rescues in Harris County has slowed, but some still were happening in high-water areas Friday morning, especially in the western part, Sheriff Ed Gonzalez said. 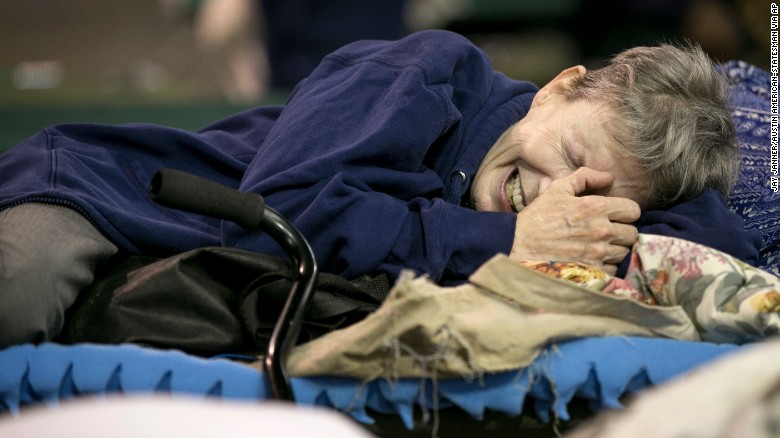 Firefighters and other emergency personnel are going door-to-door “to make sure we have not missed anyone … especially seniors or people who are disabled,” the mayor said.

Some flooding in western Houston happened because the US Army Corps of Engineers intentionally released water from two reservoirs, Turner said.

Officials have said it was safer for nearby neighborhoods if the Corps managed the water with controlled releases instead of letting uncontrolled water flow over the edge of the reservoirs as more rain was predicted.

Turner and other officials have pointed to small signs of recovery, such as fewer people in shelters, more bus lines resuming and the city’s shipping channel reopening on a limited basis.

The Houston Independent School District, which postponed its school-year opening Monday because of the storm, plans to start classes on September 11 for its 200,000-plus students.

Gas prices across the country have risen an average of nearly 17 cents per gallon after the storm knocked almost a quarter of the nation’s refinery capacity offline.

Drivers in Dallas waited in long lines for gasoline following social media reports of a Harvey-driven fuel shortage. But petroleum analysts told CNN the run didn’t owe to a dearth of supply but to the horde of drivers who panicked.

Abbott said the state was working with refineries, pipelines, trucking companies and retailers to ensure that more gasoline was on the way. Oklahoma, Louisiana and New Mexico are all sending fuel, and a pipeline that was sending gasoline from Texas to Oklahoma has been reversed.

Impact Your World: Here’s how you can help the victims

“We will see additional losses of life, if history is any precedent here,” Tom Bossert told reporters Thursday.

“You should continue to have confidence in what we’re doing as a government,” Bossert said. “But I would be remiss if I didn’t stop and say that none of that matters if you’re an affected individual.”

Trump personally plans to donate $1 million to help storm victims, according to the White House.

Abbott said that more than 440,000 people have registered for emergency assistance from the Federal Emergency Management Agency, which has approved $79 million to help victims of the storm.

After Hurricanes Katrina and Rita hit the Gulf Coast in 2005, $5.8 billion in individual assistance money was given to nearly 916,000 people affected by those storms.

Trump is expected to visit Houston and other areas Saturday, his second trip to the region this week.

As the government worked to help those affected by Harvey, another storm, Hurricane Irma, loomed in the Atlantic as a threat to Caribbean islands — and potentially, by next week, to the United States.

In a Houston neighborhood where floods have receded, Evelyn Hawkins returned to find that water had tossed furniture and other belongings in her home.

On Friday, members of her church came over to remove the soggy debris.

A few streets away, Willie Marie Burton returned to her house on Thursday — her 66th birthday — and saw the same kind of flooded ruin.

She sobbed for a few moments after surveying the damage, but moments later resolved to persevere.

“What I’m going to do after we go through some of this is, I just want to eat seafood. I love seafood,” she said. “So if I can get some seafood, I’ll be happy. And if I get a martini, I’ll be happy. But if not, I’m just glad to be here.”

‘I did not think it was going to be this bad’

Across the state, families are searching tirelessly for missing relatives. 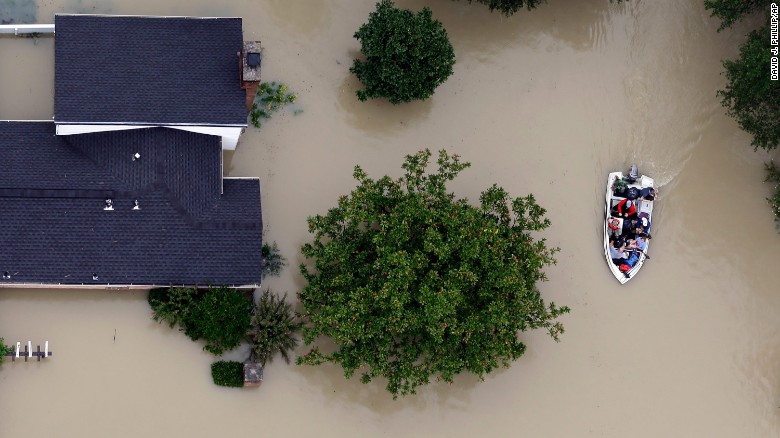 Among the storm-related deaths were a Houston man who was electrocuted while walking in floodwater and a mother whose body was floating about a half mile from her car. Rescuers found her daughter clinging to her body. The child is in stable condition after suffering from hypothermia.

When #HurricaneHarvey keeps you from home on your birthday, you're serenaded over the phone by your daughter #HoustonStrong pic.twitter.com/ldHDHeBaaI

“I did not think it was going to be this bad,” said Martinez, who got help from volunteers with the Christian charity Samaritan’s Purse. “I was speechless.”

State of Texas: Texans push back against President Biden’s agenda