Happy almost space month!! Did you know that was even a thing? Thankfully, you have us! It’s the 50th anniversary of making it to the moon, and so this year’s space month this July is extra special. Here’s what you can do to get pumped about the month! 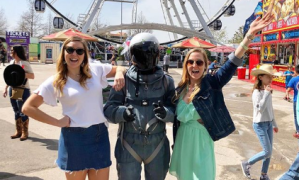 1. Spacey Casey making all the appearances

Spacey Casey is the official campaign coordinator for Visit Houston, and has been hired specifically to promote the 50th anniversary of the moon landing. He’s a cadet who just wants to get to space!! You may have seen him around: rodeo, art car parade, local coffee spots, at an astros game. Keep up with him and help him get to space here and on Instagram!!

2. The Museum of the Moon

This one is also ongoing — no need to wait for July. The 23-foot-wide moon is allllmost like being in space, except you’re just down the street at the Houston Museum of Natural Science. Don’t miss this Insta and educational opportunity! More here.

3. Get the limited edition Space Patch

The limited edition patch commemorates the 50th Anniversary of the MOON LANDING and Apollo 11 flight! @SpaceCenterHou and @Visit_Houston ran a contest to create a design in the style of a traditional NASA Mission (aka what the ASTRONAUTS wore), and the winning patch can be purchased by clicking here. Perfect for anyone who loves Houston, NASA, or history.

This rare SpaceX exhibit features the Falcon 9 booster that ACTUALLY was used to blast off… TWICE. The second time was by NASA — representing the first time the government entity reused a part that first was used in commercial space travel. The exhibit allows you to walk around and even UNDER the booster. While the exhibit was only just announced, it’s coming this summer to Space Center Houston — my guess and hope is sometime during July for space month! Click here to learn more.

Enter to win a bunch of various prizes thanks to the 50th anniversary of getting to the moon! There are five different drawings — so enter to win ASAP! Click here to enter to win!