SUGAR LAND, Texas — Kempner High School’s Akinola Ogunbiyi stands at 6 feet 5 inches tall, 325 pounds and runs a 5.3 40-yard dash. He’s a force on the field and a no doubt a key to the Cougars’ success. It’s hard to imagine that just a few years ago, he’d never even played the game.

“He couldn’t even get down in a stance, he couldn’t bend but he worked his butt off in the weight room and like I said getting limber, just doing everything that we asked him to do without ever complaining about it and he’s really developed,” explained Kempner High School head coach Darrin Andrus.

“Aki” as his friends call him, says that his family and teammates encouraged him to keep working at it when things were tough.

His persistence paid off. He’s committed to play at Texas A&M. He’s excited to get to work on the field and making valuable connections for his future. 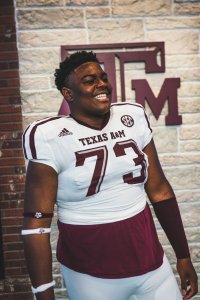 “It’s close to home, the education is great and the Aggie alumni is powerful,” said Ogunbiyi.

His path so far has looked a little different than most and his passion is sets him apart too.

“If I know I got my block in and the running back is running through my gap and I see the running back five yards ahead. I just get a joy from that. Like, I did my job. You know just doing what you’re supposed to do and getting it done,” explained Ogunbiyi.

Aki says he plans to major in business or communications when he gets to Texas A&M. He tells us he would like to have his own animation business one day or maybe be a sports broadcaster.

And a fun fact about Aki, he’s related to Rockets great Hakeem Olajuwon—that’s his dad’s cousin, so greatness is in his blood!

The Woodlands’ Drew Romo is this week’s Class Act!

HOUSTON – Luv ya red, white and BLUE! There’s nothing more American than firing up the grill for the Fourth of July, especially when it’s with legendary Houston Oilers quarterback, Dante “Dan” Pastorini.

Now Pastorini is partnering with Gourmet Ranch, a specialty meats division of Jake’s Finer Foods who is rolling out a new ecommerce platform allowing consumers to get their hands on its delicious, restaurant-quality meats. Once only available to chefs and restauranteurs, Gourmet Ranch’s meat is a cut above.

Cindi Rose and her daughter Erica Rose Sanders, are no strangers to being in the spot light. For years Cindi has been a world renowned Silhouette Artist. She's also the Founder of the Holly Rose Ribbon Foundation, which helps breast cancer survivors.

Her daughter Erica is a lawyer with her own law firm. Before that, she was known by millions when participating in several reality TV shows, like "The Bachelor". She didn't find her partner on the show, but she did find him. And now she is happily married, with two beautiful daughters.

Check out these Fourth of July freebies, deals, and specials