SUGAR LAND, Texas — Emergency crews responded to the scene of a major crash Thursday afternoon after an 18-wheeler drove off an overpass at Highway 59 near University Boulevard in Sugar Land.

According to investigators, there was an accident involving two vehicles and a big rig on the Southwest Freeway shortly after 1 p.m. Police said the trailer-truck fell from the bridge and onto the feeder road, crushing a car below.

Debris from the impact damaged another car along the feeder road, as well.

Major accident US 59 SB feeder road @ University Blvd. Traffic at the intersection is being diverted with significant delays. The main lanes of US 59 near University Blvd are open but slow due to the accident as well.

The driver of the 18-wheeler was transported to a local hospital with non-life threatening injuries.

The driver of the crushed car was able to crawl through the a window to safety. That person has also been taken to the hospital with non-life threatening injuries.

Police said the feeder road at University Boulevard will remain closed for an extensive amount of time due to damage sustained to the intersection.

The main lanes of Highway 59 near University Boulevard are open, but traffic is moving slowly due to the accident. 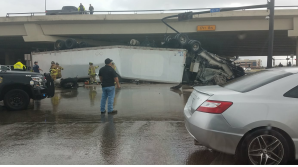 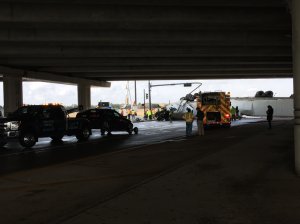 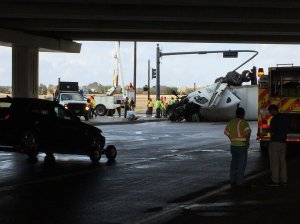 City of Houston answers your questions about water

Former Aldine ISD teacher, who had sex with 8th grader, …

These 100+ Cyber Monday deals have something for …

The best deals on affordable tech from Apple to Samsung …

The best Black Friday sales to shop from toys to …