At 96 years young, Teddy Kirkpatrick has a lifetime of stories to tell. 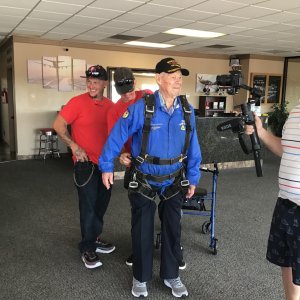 “I flew in the 8th Air Force through 37 missions over Germany in B-17s— almost fell out three times without a parachute,” Kirkpatrick explained. “Bombs don’t always fly out. As a flight engineer, it was my job to arm them and then if they got stuck to try to get them to fall out and so forth.”

Decades later, Kirkpatrick is still up for adventure. He stays busy as a member of Honor Flight Houston and the Commemorative Air Force.

He’s traveled the world sharing his war stories, but it’s his latest adventure that takes the cake. Two days after his 96th birthday he was back in a plane. This time, he was jumping out on purpose!

“I was hanging on and said ‘I just hope I don’t slip out of this thing,’ but I was having too much fun. I was waving at everybody and so forth, and I was having a ball. It was so peaceful and so quiet 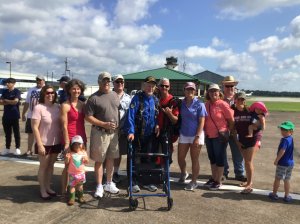 Fitting words, considering who he says has gotten him this far.

“The good Lord has done that for me. I don’t understand. I didn’t earn it any of it I don’t feel. He’s been good to me and I’m trying to pay him back,” Kirkpatrick said.

Kirkpatrick was recently honored by the French Consulate for his service on Dooms Day. They presented him with the Legion of Honor order, which is the most prestigious decoration in France.

Another adventure left on Kirkpatrick’s bucket list is to fly in the ball turret one more time.  A ball turret is the sphere-shaped gun turret on some B-17 planes that were used during WWII. 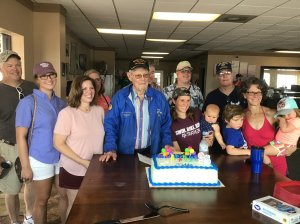