HOUSTON — Nearly 150 animals seized from a shelter by the Houston SPCA have been returned after a controversial case against the rescue home was dismissed in court. The shelter is accused of housing the animals in unsuitable conditions and neglecting the animals’ medical health, but several area-residents are arguing there is more to the situation than what the eyes can see.

“We’re deeply disappointed because yesterday at the hearing, there was a technical error with the warrant that was prepared by the Liberty County Sheriff’s Department, and none of our evidence was able to be submitted by the judge. So per the court order, the case was dismissed and now we’re here returning all of the animals,” Director of Communication Kerry McKeel at Houston SPCA said.

The Liberty County Sheriff’s Office, working alongside Houston SPCA, rescued more than 100 dogs, several cats and horses from the Puppy Dogs R Us in Dayton on a warrant that was declared defective Wednesday during a civil court hearing.

The shelter sits on an almost 20-acre plot of land that appears to hold one large, single piece of property. However, the judge discovered the address listed on the warrant is different from the address of the outbuildings where the animals were being held.

Since the warrant did not include both address, the court was forced to require the sheriff’s office to return the dogs, cats and horses to Puppy Dogs R Us within a 24-hour period.

Some said the Puppy Dogs R Us owner — a woman known simply as ‘Margie’ — has a compassion for animals that is more than her financial situation can handle. When she first started taking in the rescues, she would ask the old owners to donate food or items before leaving the pet in her care. But overtime, more and more pet owners started abandoning their animals without leaving a donation — some would even tie their dog to the property’s fence and then go on their way.

“She has a very big heart, and I think that the community didn’t realize there was a problem,” resident Michael Smith said. “I think had they known, more help would’ve been given.”

As the animals were herded back into the shelter, Margie pointed out each of the animals by name.

“She has the heart for the animals. She has the property, but she needs the help financially and physical volunteer help to come in and help with the animals,” resident Sylvia Hackbarth said.

The more animals adopted from Puppy Dogs R-Us, the faster conditions can improve. If you’re looking for a new forever friend, please click here for more information on adoptions. 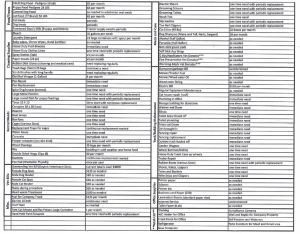 Lee Elder, who broke down racial barriers as the first Black golfer to play in the Masters and paved the way for Tiger Woods and others to follow, has died at the age of 87.

The PGA Tour announced Elder’s death, which was first reported Monday by Debert Cook of African American Golfers Digest. No cause or details were immediately available, but the tour said it confirmed Elder's death with his family.

LAS VEGAS (KLAS) -- The family of a UNLV student who died after a fraternity boxing match is demanding answers.

The I-Team has learned that Nathan Valencia collapsed after the fight ended on November 19th.  He passed away four days later.

Omicron: What makes it a COVID variant of concern?

(NewsNation Now) — As the omicron variant continues to be detected worldwide, this is not the first time a coronavirus variant has raised alarm bells in the global health community.

But how often do these alarm bells turn into something with global health implications? Here's what you need to know.

What raises your odds of multiple lottery wins?

What to do before beginning to decorate for the holiday season

Omar, Boebert blast one another after tense call