HOUSTON — A popular Houston area restaurant has shut down its social media accounts after receiving major backlash surrounding a photo posted of a recent visit from Attorney General Jeff Sessions.

It should be OK for the attorney general to eat at El Tiempo Cantina, right?

Not at all, according to many critics. 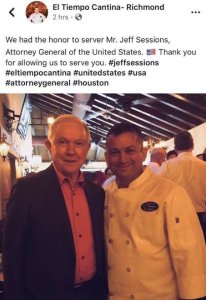 On Friday, Sessions was in Houston meeting with law enforcement and federal prosecutors on illegal immigrant crackdown and other crime issues, then visited the restaurant to enjoy a meal. In fact, reports say he visited a couple of Tex-Mex restaurants during his visit.

While at the Montrose restaurant, he proudly took a photo with the chef.

The photo was posted to El Tiempo- Richmond’s social media page, then later removed after commenters flooded the page, blasting the business for the post stating it was “honored” to serve Sessions.

Many people were insulted by the wording of the post, especially since members of the staff and customers are immigrants and Sessions supported the controversial practice of separating children from their parents at the United States- Mexico border.

Before the social media accounts were deactivated, the business posted a statement from the owner, Roland Laurenzo, about the incident.

“El Tiempo does not in anyway support the practice of separating children from parents or any other practices of the government relative to immigration. The posting of a photograph of the Attorney General at one of our restaurants does not represent us supporting his positions.

The Secret Service contacted us that a government official was coming to dinner at our establishment and his identity was not known until he walked through the door. The man came to dinner and he was served without us even thinking about the political situations. We were preoccupied with the Secret Service and catering to their wants and needs. The only thing on our minds was serving great food and giving great customer service. It was posted without review or approval by ownership and this has lead everyone jumping to conclusions that somehow we are involved in this political matter. We don’t approve of anyone separating parents and their children.”

Despite the restaurant trying to clear up the confusion, calls were made for protests and boycotts.

The nearly five-month investigation, conducted by two outside lawyers who spoke to 179 people, found that the Cuomo administration was a “hostile work environment” and that it was “rife with fear and intimidation.”

Biles returns to competition with a bronze medal and a smile

TOKYO (AP) — Simone Biles returned to the competition at the Tokyo Olympics in style, and will leave with another medal.

What color it is really isn't the point. That she delivered a tense, heart-pounding routine on the balance beam and nailed it with a smile meant everything.

NEW YORK (AP) - New York City will soon require proof of COVID-19 vaccinations for anyone who wants to dine indoors at a restaurant, see a performance or go to the gym, Mayor Bill de Blasio announced Tuesday, making it the first big city in the U.S. to impose such restrictions.

The new requirement, which will be phased in over several weeks in August and September, is the most aggressive step the city has taken yet to curb a surge in cases caused by the Delta variant. People will have to show proof that they have had at least one dose of a vaccine.

Art of the drink: The way of tea

Mu wins gold for US in women’s 800 meters

The 2021 summer COVID case surge is already worse than 2020’s. How is that possible?

The fastest-selling car in each state in June

Houston weather – cold front in sight after a steamy weekend

Houston weather – hot, humid, spotty rain and a preview of the tropics in August

Summer travel boom not just seen in the air, but also on the road

Jet fuel shortage hits US airports in the West

Average US gas price rises 2 cents per gallon to $3.22