HARRIS COUNTY, Texas — Another Jones brother has been charged in connection to a deadly shooting at a crime ridden northeast Harris County apartment complex.

Kenneth Emmitt Jones, 35, has now been charged with capital murder after charges were dropped against his younger brother, Jeremy Jones, who was caught up in the case of mistaken identity.

The three Jones brothers are all large in size, which possibly led to the wrong one being fingered as the triggerman who shot six people, killing two of them, at what is considered one of Houston’s most dangerous apartments.

Despite a small Harris County Sheriff’s Office station on the property of Haverstock Hill, bullets sprayed the area when one of the Jones brothers opened fire on a group of people one Sunday evening. 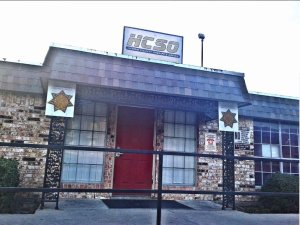 According to investigators, a group of men were sitting on a staircase in front of building No. 6 around 6:30 p.m. on March 26 when a woman who lived in an upstairs unit began to complain, promting an argument. The complaining resident told the group that she was a police officer, investigators said.

Two Jones brothers and a woman with bleach-blonde hair drove up in a white car a few minutes after the argument, officers said.

Deputies said the Jones brothers jumped out of the vehicle and approached the people sitting on the stairs. One of the brothers was armed with a semi-automatic rifle, possibly an AR-15, and another argument broke out.

Witnesses said, at first, it appeared as though Harvey Jones was placing the weapon back into the trunk, but his brother suddenly grabbed it and opened fire.

Witnesses said the alleged gunman was not shooting randomly into the air, he was actually tracking each person he aimed at, striking six people multiple times. The brothers then fled the scene.

Christopher Beatty was shot in the leg and lower back. He was rushed to LBJ Hospital, where he died.

Gary Rusher, 31, was shot in the head and the leg and was pronounced dead at the scene.

Two more men and two women were also shot and taken to various hospitals in critical condition. Two of the victims were Rusher’s siblings; his brother Isaiah, and his sister, Brandy Rusher, a former contestant on Season 4 of Tyra Banks’ America’s Next Top Model.

Brandy Rusher became known for her street bravado, striking features, blazing red hair and gap teeth. She also had a slight lisp. It was highlighted on the show that she was from Houston’s underserved community and was fighting to change her life. After hearing that she was one of the victims in the Haverstock shooting, fans flooded her social media pages with well wishes.

Warrants were issued for the arrests of two of the Jones brothers after they were identified from a photo lineup, but one of them was falsely accused.

Harvey Jones, 34, was charged with aggravated assault with a deadly weapon.

Jeremy Jones, 28, was initially charged with capital murder, but those charges were dropped on March 31. He remained behind bars, however, on an unrelated charge.

Investigators now believe the eldest brother, Kenneth Jones, was actually the shooter. He is not in custody at this time, but a warrant has been issued for his arrest.

The Jones brothers are not strangers to the law.

Jeremy Jones’ criminal history includes charges for unauthorized use of a vehicle, theft and evading arrest.

Harvey Jones has a bit more added to his rap sheet, with past charges including assault of a family member, driving with a suspended license, unauthorized use of a vehicle, unlawful carrying of a weapon, trespassing, terroristic threat and disorderly conduct.

And big brother Kenneth Jones has a laundry list of charges, dating back to 2000, including failure to identify, forgery, trespassing, drug possession, terroristic threat, aggravated assault with a deadly weapon and deadly conduct.

Haverstock Hill is known for violence and several fight videos among residents can be found on Youtube.

A Google review search shows the apartments have been given a 1.8 out of 5-star rating. Less than 10 out of 52 people had anything positive to say about the complex; the remainder of the reviews were from people stressing how dangerous they are.

This Houston museum ranked among the best attractions …

DA: Man gets 38 years for staging scene after killing …

HOUSTON (CW39) – This weekend Meteorologist Carrigan Chauvin was lucky enough to taste some of the BEST and WORST gumbo of her life! For the 2023 5th Annual Gumbo Cookoff at Cedar Creek Bar & Grill. The weather was perfect, drinks were cold, and …

A look inside the Grammy gift bag

Want to know how to treat yourself like a celebrity? We’ve got the rundown of gifts for a Grammy-level self-pampering session.

What are the best grooming products for cats and …

BestReviews is reader-supported and may earn an affiliate commission. Details. SPRUCE UP YOUR CAT AND DOG AT HOME WITH THESE 12 GROOMING PRODUCTS Regular grooming is not only helpful in keeping your pet looking dapper, but it’s actually necessary …

CW39 NO WAIT WEATHER | Rated Most Accurate for the …

Why researchers say autism has tripled over the last …

Get engaged at Cracker Barrel, win free food for …

How to safely use payment apps

Why do Texans eat pickles at movie theaters?

DA: Man gets 38 years for staging scene after killing …

Man caught in Neb., accused of killing mom has bond …