HARRIS COUNTY, Texas — A 21-year-old mother appeared in court Monday night after she was accused of abandoning her newborn daughter outside her northwest Houston apartment immediately following the infant’s birth.

Sidney Woytasczyk is charged with abandoning a child and causing serious bodily injuries.

In court, a prosecutors requested a bond of $40,000 but the judge reduced it to $20,000.  The suspect’s defense attorney argued Woytasczyk has no criminal history and is a student with limited funds, earning only $400 a month.

“I’m taking into consideration, the facts of this case,” the judge said. “I’ve got some concerns based on the allegations about her mental health status at this time. I will not be granting a personal release bond in this case.”

“The case has really touched the heart of everyone here at the sheriff’s office, and particularly the investigators who were assigned the case,” HCSO Assistant Chief Armando Tello said.

Investigators said the mother, who claims she had no idea she was pregnant, gave birth to the child alone around midnight on Aug. 10 inside the kitchen at the Cypress Creek apartments on Red Oak Drive. Officers said Woytasczyk cut the child’s umbilical cord, left the child in a grassy area along a pathway outside and then went to bed after cleaning up. 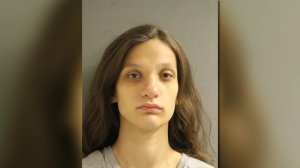 The newborn remained outside unattended for nearly 6 hours before being discovered in a flowerbed at the edge of the complex by a resident.

“The witness observed a baby on the ground covered in ants,” a prosecutor said.

The child suffered from insect bites and minor scrapes and scratches, deputies said.

“[Woytasczyk] didn’t want the child to come between her and her boyfriend,” HCSO Sgt. Matt Ferguson said. “She didn’t want him to know about it. And that was her reasoning for moving the child outside.”

The child father and suspect’s boyfriend was unaware the child existed, HCSO Deputy Kimberly Thomas said. Investigators said he had commented on the suspect’s gain weight and asked if she was pregnant, but the suspect denied it. He’s not expected to face charges in the case.

Still hospitalized, the infant remains in the custody of Child Protective Services. The victim’s condition has improved although she is still being treated for bacterial infection.

“If the child was not found, it most likely could have died,” Thomas said. 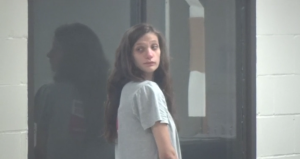 A nurse said since the umbilical cord wasn’t properly cut or clamped, the child was in danger of bleeding out.

The charges against Woytasczyk carry a maximum sentence of 20.  Deputies said it’s possible additional charges may be filed, but it’s too early in the investigation to tell.

“This is definitely not an everyday case for us. It’s going to require a little more investigation,” Ferguson said.

A neighbor and former classmate of the victim’s mother told NewsFix the child was naked in the bushes, soiled with dirt and covered in ants. Officers arrived at the scene around 5 p.m.

“How could they do this to their own baby,” the neighbor said. “It’s just heartless.”

Most popular tattoos in each state, political and placement

(NEXSTAR) – A woman who gave birth at Miami International Airport over the weekend couldn’t have given her newborn a more fitting name.

The baby girl, who was born Sunday, was named Mia — just like airport’s location code (MIA).

FRIENDSWOOD- Friendswood Police are warning parents to be alert when picking up or dropping off kids at day care. This alert is in response to a vehicle burglary reported last week at a Friendswood day care center.

In the past, the suspects would strike in the morning, looking for vehicles with purses or valuables left behind as parents walk their children into preschool facilities. However, this most recent burglary was in the afternoon during pick-up time.