HOUSTON — A driver was seriously injured Tuesday night after losing control of his pickup truck and crashing into an industrial structure in the Greater Inwood area, according to the Houston Police Department.

Officers responded to an industrial park on N. Houston Rosslyn Road at W. Mount Houston Road around 10 p.m. Investigators said the driver was headed westbound on W. Mount Houston when he failed to make a turn at the intersection and continued straight. The pickup truck reportedly hit a curb where the road ends, causing the vehicle to go airborne before crashing into a fence and several metal pipes.

The driver was pinned inside the vehicle and had to be removed by a heavy rescue team with the Houston Fire Department.

He was taken to the hospital in serious but stable condition, police said.

HPD said no other vehicles were involved in the crash, which is still under investigation. 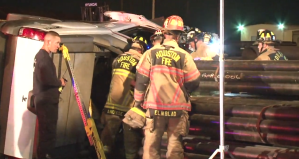 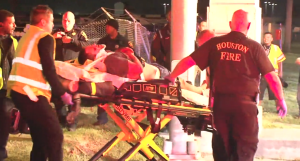 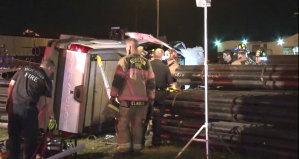 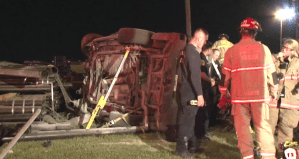 Don't drink and drive, because law enforcement will be in full force this holiday weekend. In preparation for the upcoming Memorial Day Holiday weekend, Constable Mark Herman’s office has prepared an Operations Plan with the mission of locating intoxicated and reckless drivers within Harris County Precinct 4 and prevent major accidents caused by excessive speed and or intoxicated drivers.

Beginning Tuesday, May 26, METRO's 418 Harris County Jury Shuttle will resume service and METRORail's Red Line will increase frequency during weekday hours. The safety of the Authority's customers and employees remains the top priority. METRO continues to encourage riders to use public transit for only essential trips.

A complete list of the schedules can be found by clicking this link.

Your favorite indulgence may be cutting back on locations due to the pandemic. Find out if your favorite food chain is rolling back locations and share your thoughts!

Restaurant and fast food chains, like other businesses were left fledgling during the pandemic that left them crushing their bottom line. Now many announce they're cutting chain locations by the multitude.

Schools in the area are extending closures due to coronavirus pandemic