HOUSTON — Several medical personnel and patients — some still in their beds — are being evacuated from Ben Taub hospital Tuesday afternoon as officers execute a secondary search of the building following reports of an active shooter, the Houston Police Department said.

“No one has been injured. No one has been found shot. And no shooter has been apprehended,” HPD Chief Art Acevedo said. “The Houston Police Department has searched all six floors behind us and the basement, and we have not found any evidence of an active shooter. We’re also looking at all of the security cameras and have not found a suspect.”

The reports of shots being fired came in around 2 p.m. A witness said the alleged shooting happened on the second floor at the Ear, Nose and Throat clinic. Acevedo said individuals have reported seeing an armed white man of an unknown age and with a bald head, but there has been no evidence of such.

“It’s an ongoing investigation, we haven’t found any victims or any evidence of an active shooter,” Acevedo said.

We are responding to reports of shots fired at Ben Taub Hospital; SWAT and PIO enroute #hounews

The chief said the large police presence around and inside the hospital is a part of standard protocol.

Outside the hospital nurses and doctors continued to work with patients who were wheeled outdoors.

People inside and outside the hospital have been tweeting their loved ones, letting them know whether they’re safe or in danger. 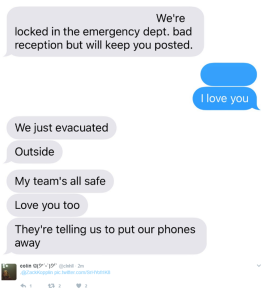 At Ben Taub report of active shooter. No victims located. Active search continues. All patients and employees safe at this point.

HOUSTON (AP) — The Houston Texans canceled practice and all other in-person activities Wednesday on the advice of their medical team because some players weren't feeling well. Coach David Culley said they have not had any positive COVID-19 tests.

Culley, speaking to reporters via Zoom, said that the team would resume normal operations Thursday.

HOUSTON - We have another Road Rule to share with you this morning sponsored by the Mokaram Law Firm. CW39 Houston's Maggie Flecknoe spoke with Sgt. Dashana Cheek, with the Harris County Sheriff's Office, for today's Road Rule of the day.    She asked, "what do we do if our vehicle stalls?" Follow Maggie Flecknoe on Instagram, Twitter and Facebook.