HOUSTON — The Harris County District Attorney’s Office has accepted charges against a man who allegedly assaulted his wife before leading police on an hour-long chase from Baytown to Houston Thursday morning.

Eric Brown, 42, is charged with aggravated assault with a deadly weapon and felony evading in a motor vehicle.

According to authorities, Baytown police were dispatched to Coachman Street after receiving a 911 call around 7:28 a.m. about a husband pistol-whipping his wife. 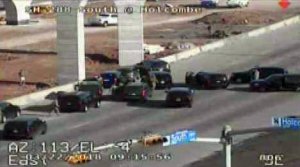 The newly-wed couple had gotten into an argument shortly after Brown returned from work in the early morning hours, according to investigators. During the argument, police said the suspect pulled out a handgun and threaten the victim by pulling the trigger multiple times but the weapon didn’t fire. The couple got into a brief altercation, during which the wife’s hand was reportedly injured.

While the victim ran to safety, police said the suspect came out of the home and pointed the gun at himself. He pulled the trigger, but the weapon did not discharge.

Brown, fled the scene before officers arrived, but police spotted his SUV and a chase ensued. The man traveled on the freeway from Baytown to Houston, and HPD joined in when the suspect approached 610 and Turning Basin.

The suspect eventually made it to Highway 288 near the Texas Medical Center, with dozens of officers and helicopters tailing him.

The driver could be seen opening his vehicle door several times, appearing to look for a spot to make a run for it.

SWAT officers and police squad cars boxed the man in on 288 near Holcombe, but the man is ignoring commands to surrender.

The man managed to get around the officers, and took off further down the highway.

Officers boxed him in once again, and officers broke the windows out of the vehicle.

They then dragged the man out of the SUV and put him on the ground.

LIVE on #Periscope: HPD Chief Finner provides information on pursuit that began in Baytown and ended at 288 and McG… https://t.co/1bhuPpPauc

“One thing I want our citizens to know is time is on our side. We have time. We wanted to just wait it out and do what we can because at the end of the day, we want everybody to go home safely,” HPD Asst. Chief Troy Finner said. “We originally had reports that the suspect had a weapon and a self-inflicted gun wound. Once he was pulled out of the vehicle, we didn’t observe any injury.”

Paramedics with the Houston Fire Department treated the suspect, who was then transported to the hospital.

Police said no citizens or officers were injured, and there was only minor damage to a patrol car.

Brown has been charged with aggravated assault with a deadly weapon and felony evading in a motor vehicle.

WWE responds after 2 wrestlers walk out of event

WWE responds after 2 wrestlers walk out of event

How to get Taco Bell’s Mexican Pizza early

How to get Taco Bell’s Mexican Pizza early

How to report baby formula price gouging in Harris …

Can gender pay gap widened by pandemic be closed?

Teen that drove through tornado part of TxDOT ad

Odorizzi stretchered off in Boston, to get MRI

The price of owning your Shiba Inu

Another week of heat, but a cold front is in sight

An exclusive look inside the radar with NWS

Texas is driest state in U.S. at risk of wildfire

Still hot and humid, but less humid in a few days

Multiple lanes of I-45 north of Galveston closed …

Rain out, heat in as Texas braces for a scorcher