HOUSTON- A massive water main break on Thursday in east Houston lead to a flooded freeway, hundreds of businesses being forced to shut down and a boil water notice.

Friday morning, Mayor Sylvester Turner tweeted out an update saying the water pressure readings at midnight and at 5:00 a.m. were stable. He says they're working with TCEQ to approve a sampling plan to stop boiling water.

Most of the city is impacted by the boil water notice. Visit ReadyHarris.org to see a map of the effected area. 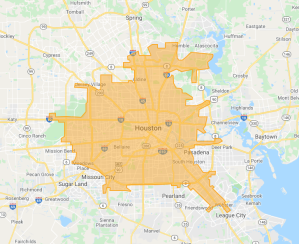 While the boil water notice is in effect, you should be using boiled or bottled water to make your coffee, cook and brush your teeth. Harris County Public Health recommends bringing tap water to a rolling boil for one to two minutes before letting it cool and storing it in clean containers.

The water main break made the 610 East Loop at Clinton Street completely impassible on Thursday. Authorities say about a dozen cars were stuck in the water and three people had to be rescued from their cars.

No homes were damaged and no one was hurt. Mayor Turner said the break is a reminder of the city’s aging infrastructure.

Bottled water is in high demand. Lots of grocery stores ran out yesterday. H-E-B released a statement Friday morning saying, "As of last night, we have received 40 trailers of water and expect more today. We will continue to work to supply our stores in the city limits until the boil ban is lifted.they are getting more shipments and restocking their shelves as soon as they can."

How to file monthly business taxes during pandemic

The Texas Comptroller’s office is still available online for those experiencing business and economic hardship. A lot of folks were able to pay state and local sales taxes from customers in February on the March 20, 2020, due date.

Now that we have orders to stay home, the annual tax deadline was extended to July.

The City of Houston delivered their daily COVID-19 update. which included an increase on domestic violence.

Houston Mayor Sylvestor Turner said we have 81 new cases in locally bringing our total to 587. The Mayor attributes additional testing sites to the increase in numbers. The downside is, numbers will continue to increase as more are tested for COVID-19 in our area.

Harris County, two more Harris County Sheriff's Office employees at the Harris County Jail, located at 1200 Baker Street - one deputy and one detention officer - have tested positive for COVID-19. The staff is now at 15 positive cases.

Here is the complete statement issued by HCSO: