Many residents in the Third Ward area recently received a letter informing them of an address change that they actually didn’t file. If they do not address the change within just 30 days, their rights could be canceled.

It’s exactly what happened to resident Lynn Lane, who almost threw the letter away thinking it was junk!

“It says official election mail, but you get everything that says official something or another. And so for me, I honestly thought this was just another piece of junk mail that happens during election time,” Lane said.

It turns out the letter was an official notice from the County Tax Assessor Ann Harris Bennett stating that his voter registration had been suspended. This stems from a Republican-led challenge, which could could affect thousands of Houston voters.

Alan Vera of the Harris County Republican Party has sent 4,000 of these “challenges,” but says this isn’t a political attack.

“The goal is to make sure people are voting in the correct election. If there was something weird about your address, we challenged it,” Vera said.

However, the Harris County Democratic Party isn’t buying that.

“Republicans are taking advantage of a loophole,” Communications Director Odus Evbagharu said. “It allows them to challenge voter registration, and they look for ways to continuously target minority voters.”

Whether this is a political attack or not, some residents feel this is just a waste of time and money.

The Harris County Attorney’s Office is reviewing the affidavit concerning these residents. 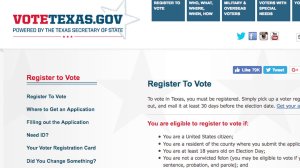 “Democrat Voter Registrar Ann Harris Bennett’s records lists thousands of voters registered at locations that do not seem to be residences, including UPS stores, churches without residences, industrial facilities, and the Harris County Jail. Volunteer Harris County Republican Ballot Security Chairman Alan Vera exercised his right as a registered voter to ask Ms. Bennett to verify these addresses – a request that Texas law allows only a registered voter to make. The list of addresses included voters of all stripes – even a Republican precinct chair.

“In response, the Democrat Voter Registrar mistakenly suspended the registration of thousands of voters.

“The Harris County Democrat Party then claimed Mr. Vera’s request had ‘changed the registration status’ of thousands of Democrat voters, when the list was party-neutral and it was the Democrat Voter Registrar who had suspended those registrations. More disturbingly, a Democrat partisan then published online the personal information of party volunteers who work with Mr. Vera, in a vain attempt to intimidate them.

“We will not be intimidated. It is inexcusable that Democrat Ann Harris Bennett failed to follow the law. She should not have suspended voters’ registrations. And the outrageous doxing and threats against Republican volunteers by leftists only hardens our resolve to fight their dirty tricks.

“This also shows that the Harris County Democrat Party doesn’t understand the law, and traffics in ‘fake news’ in a futile effort to gin up support for dismal Democrat candidates dedicated to failed left wing policies that Texans reject. Or do Democrat voters actually live in UPS stores, industrial facilities, and the Harris County jail?

“Democrat Voter Registrar Ann Harris Bennett should NOT have jumped the gun by suspending those voters’ registrations. Instead, the law requires her to give them 30 days to respond to a written inquiry about their residence, to ensure they vote in the right jurisdictions. We urge Democrat Ann Harris Bennett to follow the law and quit violating voters’ rights.”

HOUSTON (CW39) Many in Texas remain outraged after losing power due to last week’s historic and devastating winter storm.

Now, President Joe Biden and First Lady Jill Biden are expected to arrive in Houston this afternoon to discuss relief efforts with Governor Greg Abbott and other leaders.

HOUSTON (CW39) Prescription discounter GoodRx has just announced a comprehensive Vaccine Guide where you can learn about the COVID-19 vaccine, track availability and find an appointment to get vaccinated.

Vaccine information has been fragmented and availability unclear, so GoodRx has built the go-to destination for all Americans to track the vaccine rollout locally.

HOUSTON (CW39) They are a fixture of the Waugh Street Bridge as you look toward downtown Houston. The Bat Colony under this bridge, on Waugh Street by Buffalo Bayou and Allen Parkway is so popular, people come from all over just to watch them take off around sunset, to search for food.

But, last week's Winter Storm impacted these nocturnal creatures in a devastating way.

US carries out airstrikes against Iranian-backed militia facilities in Syria