HOUSTON — Multiple counties in the Houston area remain under tropical storm warning Wednesday morning as all eyes focus on Cindy’s movement toward the coasts of Louisiana and Texas, according to the National Hurricane Center.

Meteorologists report Cindy remains rather disorganized with more confidence in forecast landfall near the Sabine River. As of 11 a.m, the tropical storm has reached maximum sustained winds of 50 mph. 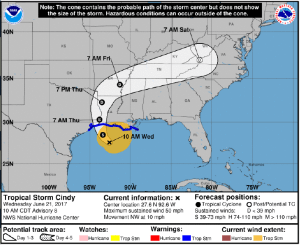 Widespread rises to action stage are expected across rivers and tributaries in southeast Texas and into next week. Residents should be on the lookout for tributaries of San Jacinto and Trinity River basins.

Isolated rains of 1 to 3 inches are expected to hit the eastern parts of southeast Texas sometime Wednesday night, according to the National Weather Service. Rain totals have been scaled back across southeast Texas and west of where the center is predicted to make landfall.

Tropical Storm Cindy is located just over 180 miles southeast of Galveston and continues to move northwest toward the Texas and Louisiana coasts. The warning covers coastal areas from San Luis Pass in Texas to the mouth of the Pearl River in Louisiana.

National Hurricane Center said Cindy is expected to bring heavy rainfall including minor coastal flooding around the Bolivar Peninsula. On Wednesday, officials issued a voluntary warning for residents of the Bolivar Peninsula with medical and other special needs. There is a possibility of limited services available around times of high tide during Wednesday Afternoon through Thursday morning due to potential flooding along Highway 87.

To stay up to date, check back with CW 39 Houston!