HOUSTON — Jack Fisher hovered 200 miles above earth while his family, friends and coworkers were tormented by a gruesome storm.

Fisher was one of six astronauts on International Space Station. He looked down on his hometown of Houston — headquarters for NASA’s human spaceflight operations — as Hurricane Harvey wreaked havoc on the Gulf Coast.

“Harvey fills the window creating a path of destruction as it traverses the Gulf. Praying for the people there and hoping for sunshine,” Fisher wrote on social media from aboard the ISS Wednesday.

On Saturday, Fisher, along with fellow NASA astronaut Peggy Whitson and one Russian cosmonaut, will return to earth. The Americans will begin the trek back to a water-logged Houston.

Getting the astronauts on solid ground is the next great challenge for a small team of NASA flight controllers who have been hunkered down at Johnson Space Center in Houston for days. The flight controllers have been living at the NASA complex, riding out Harvey and providing critical support to the crew on board the space station.

It’s because of that ground-based team that astronauts were able to get updates on their families as Harvey pounded the city.

The team there was able to keep things running relatively smoothly, despite Harvey, but their day to day life was anything but normal.

About 13 cots lined the walls of the complex. Staff caught naps between shifts. Flight director Royce Renfrew posted pictures on social media of the beds. A sign outside the makeshift bunk room reads, “SLEEPING QUARTERS shhh…”

“It takes an incredibly professional group of individuals to come in and sit down and fly the space station for nine hours, or some people had to take 13 hour shifts,” NASA flight director Zeb Scoville told CNN. “Then they had to turn around, wake up and do it over again.”

Scoville, who is leading the ground-based team, said everyone is still dressed in business wear. It maintains “a level of respect” for the history of flight controllers before them, Scoville said.

Fisher and Whitson, along with Russian cosmonaut Fyodor Yurchikhin, are set to depart the space station Saturday in a capsule and splash down off the coast of Kazakhstan at 9:22 p.m. ET.

Fisher and Whitson will travel to Germany, and from there the astronauts will board a plane to Houston. The final leg of their trip will happen a bit later than initially scheduled because of damage to Ellington Airport airport, a NASA and U.S. military flight hub, an agency spokesperson said.

Whitson — a seasoned astronaut who owns the record for the most cumulative time a NASA astronaut has ever spent in space — had to cancel her final press conference aboard the space station because of the storm.

She shared her thoughts on returning to a storm-ravaged city in messages posted to NASA.com.

“Our home is fine, but so many friends and co-workers have been impacted,” she said. However, “any trepidations I might have about returning in the aftermath of a hurricane are entirely eclipsed by all those folks keeping our mission going and physically putting themselves out there to help folks who were less fortunate than us.” 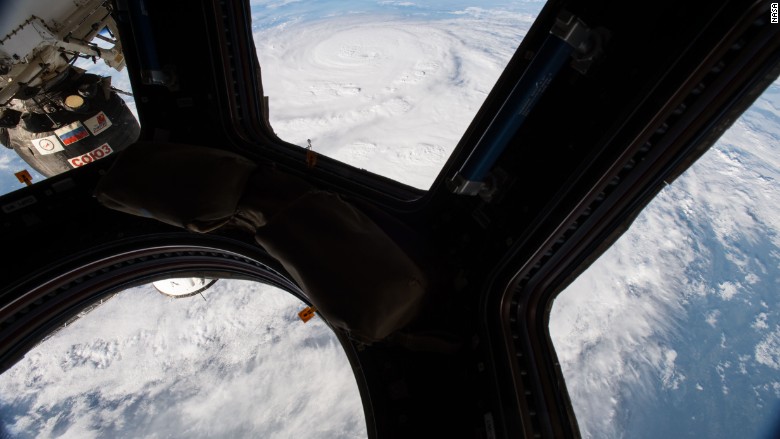 In addition to the crew members holed up at the space center, various NASA workers have phoned in from home to lend more help.

They did this, “all the while worrying about the Sheetrock that needed to be torn out of their flooded house,” Whitson said.

Scoville, the flight director, said, “It doesn’t matter what your job or title is. This affects a program manager, an astronaut, or a flight director just as well…and they’ve all been affected and have to deal with the destruction.”

But despite it all, Scoville added, morale is high.

“They’re going to keep [the space station ] flying,” he said.

The crew even has its own mission patch to commemorate their efforts to keep Johnson Space Center up and running in spite of Harvey. Its tagline is “ad astra per aqua.” It means, “to the stars, through water.”

HOUSTON (CW39) 1/22/21 It's Thursday morning and we're tracking yet again, another fog advisory.

Wednesday, we we're tracking mild temperatures but a slightly cooler feel that we had the day before with a lot of cloud cover for us today and in general, a pretty mild day.

HOUSTON (CW39) Houston Police Department Robbery Division investigators are looking for a robbery suspect who said he needed to "feed his kids" as he held up a convenience store in South Houston.

The suspect then drives to a second convenience store not far away and committed a second robbery, according to police. Take a look at the store surveillance video and see if you recognize the suspect.

HOUSTON (AP) — A chemical company and a former employee have been indicted for their roles in a 2014 poisonous gas leak that killed four workers at a Houston-area plant, federal prosecutors announced Tuesday.

Four employees at the now-closed DuPont chemical plant in LaPorte, Texas, died in the release of methyl mercaptan — a chemical used in the manufacture of insecticide and fungicide.

Can COVID-19 vaccines be mixed and matched?

No pardon for Texas attorney general in last-minute list

On Day One, Biden to undo Trump policies on climate, virus

No pardon for Texas attorney general in last-minute list