HOUSTON — The Fort Bend County Sheriff’s Office is searching for at least two suspects accused of robbing a Cricket Wireless store at gunpoint over the weekend, according to investigators. 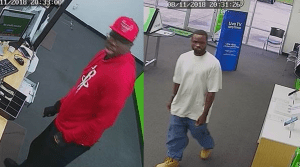 The men reportedly targeted the phone store in the 9400 block of Highway 6 South around 8 p.m. Saturday. Investigators said the suspects walked into the business and asked about cell phones. While the employee was behind the counter, one of the suspects pulled out a gun and demanded money.

The employee was forced to open the cash register.  One suspect pulled money from the register, while the other held a gun to the employee’s neck, deputies said.

The suspects allegedly stole 30 cell phones in addition to the cash.

One suspect is believed to be between 23 and 30 years old. He is about 6 feet 6 inches tall and weighs between 250 to 300 pounds. The man was wearing  black gloves, a red Chicago Bulls hat, a red Rockets hoodie, black jogger-style pants and glasses. He also had a skin pigmentation on his lips, investigators said.

The other suspect stood at about 5 feet 8 inches tall. He weighs about 165 pounds, has black hair and is between 23 and 30 years of age. He was wearing a white shirt, blue pants and tan Timberland-type boots. 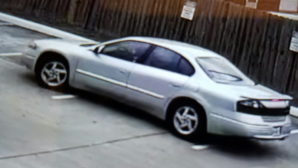 Anyone who has information on this crime or any other crimes is asked to call Fort Bend County Crime Stoppers, Inc. The agency is offering a cash reward for information leading to an arrest or charging of the suspects.

TEXAS CITY, Texas- A man is dead after police believe he shot and killed two people in Texas City and then led authorities on a chase that ended in Webster.

The original call, which was a report of shots fired, came into the Texas City Police Department Thursday around 8:20 p.m. When officers got to the Green Villa mobile home park on FM 3436, they found a 39-year-old man and a 45-year-old woman dead inside one of the trailers.

It was a close call for two undercover HPD officers as they were shot at multiple times Tuesday night in south Houston.

It started when the undercover HPD officers were doing surveillance at Spotts Park after several burglaries had been reported in the area. It was around 11:15 p.m., which is after hours for the park, when they saw two vehicles leaving the park.

Man dies after crashing into tree in Needville

NEEDVILLE, Texas —  Authorities say a man is dead after crashing into a tree early Tuesday morning off FM 442 in Needville. The Fort Bend County Sheriff's Office got the call around 1:00 a.m. The Needville Fire Department also responded to the crash. “We got a call of a crash, a motor vehicle crash. Once we got on scene, it’s a one vehicle, single vehicle crash versus a tree. The…

EWG Study: Texas water is most radioactive in the nation!

Gold star on your Texas driver’s license? If not, you could have trouble at airports in 2020