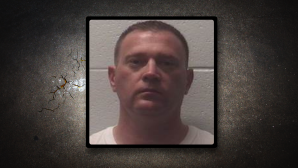 DEER PARK, Texas — A local U.S. Army recruiter turned himself into authorities Friday after he was accused of sending a lewd Snapchat picture of himself to a high school student, according to the Deer Park Police Department.

Adam Matthew Perkins, 37, has been charged with displaying harmful material to a minor.

On Dec. 13, 2017, Perkins was visiting Deer Park High School when he met a 16-year-old student in the school cafeteria.

The girl said she was selling sweet treats for a fundraiser in the lunchroom when she was approached by Perkins, who gave her a $20 donation. The girl said Perkins then offered her an Army pre-test through Snapchat and the two exchanged account information.

The student said Perkins first sent her a photo of himself eating the dessert he purchased, and the texts became more “weird” after that.

The student said Perkins sent her a message saying “I’m no angel” and another one remarking that she had sexy toes. He then allegedly sent her a nude photo of himself lying in a bed.

The girl then reported the activity.

When questioned by authorities, Perkins admitted exchanging Snapchat information with the student, but said he sent the nude photo of himself by accident.

Perkins was booked into the Harris County Jail, and his bond was set at $1,000.

July 7th, 2020 - The Texas GOP is responding to Mayor's concerns about the Texas GOP Convention to be held in Houston next week. Here's a look at that video just posted online:

WASHINGTON (NEXSTAR) -- In the heat of summer, the south has become a hotspot for the coronavirus.

Cases in Alabama have continued to increase following the Fourth of July weekend.

Local health officials are reporting an outbreak at a nursing facility in East Harris County.

The elderly and people with underlying health conditions or weakened immune systems are at much higher risk for developing serious complications from COVID-19, including hospitalizations and death.

All Florida school districts must reopen campuses next month, Dept. of Education says