HOUSTON— The Harris County District Attorney’s Office has filed new charges against three others who helped contribute to the deaths of a young mother and her 3-month-old son in March, Kim Ogg announced Thursday during a press conference.

Veronica Rivas, 20, was drinking margaritas and tequila with a 17-year-old friend March 1 at the Crescent City Connection Sports & Oyster Bar in Clear Lake before getting behind the wheel, according to court documents. Investigators said Rivas later crashed her car into another vehicle, killing Shayla Joseph, 36, and her baby, Braylon.

The suspect was reportedly going 90 mph in a Lincoln MKX when she rammed into the back of the mother’s Toyota Scion.

Rivas was arrested and charged with two counts of intoxication manslaughter. She is expected to be indicted this week, Ogg said.

And now, the bartender Amy Allen, 40; the bar owner’s son Devin Jackson, 24; and a third person, John Media, 23, will also be charged.

“One night of reckless partying resulted in a lifetime of loss for Bryan Joseph, who lost his wife and son,” Vehicular Crimes Divison Chief Sean Teare said. “We owe Mr. Joseph, Shayla Joseph and young Braylan justice, and that includes not just holding Veronica Rivas responsible, but every person who had a hand in setting this tragedy in motion.” 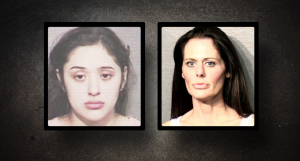 Allen is charged with criminal negligence for allegedly letting the underage friends to drink alcohol without checking them for identification. She was arrested Thursday.

Jackson and Medina are both charged with knowingly purchasing and providing alcohol to a minor.

Medina was also charged with aggravated perjury for lying to a grand jury, which carries a penalty of up to 10 years in prison.

The Houston Police Department is still in the process of arresting Jackson and Medina.

HOUSTON (CW39) Houston drivers are discovering and reacting to the return of "Be Someone" over the I-45 interchange near downtown.

HOUSTON (CW39) The Houston Police Department Robbery Division is releasing store surveillance video in hopes someone will recognize the suspect and come forward with information that will lead to their arrest.

On Friday, March 26, 2021, around 12:00 pm, the suspect entered the Walmart store, located at the 2700 block of Dunvale, in Southwest Houston. The suspect walked throughout the store and shoved items in a backpack that he was carrying, according to investigators. He then walked out of the store without paying for the items, but was then approached by the store security guard, who was trying to stop him. Authorities say that's when the suspect pulled out a knife and told the security guard that he would cut him if he tried to stop him.

HOUSTON/NEXSTAR (CW39) NASA and Space X are delaying Thursday's launch to the International Space Station until Friday, due to unfavorable weather conditions.

WATCH: Pelosi thanks George Floyd for ‘sacrificing’ his life for justice

Texas to Utah: animal shelters team up to save 72 orphan kittens

Why 1 murder count against Chauvin may not stick