HOUSTON — Bizarre video has been released by youtube blogger benxmoken showing an altercation on a Metro train between a naked man and Houston police officers. 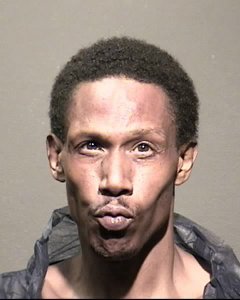 According to HPD, a witness saw a naked man walking down the street in downtown Houston. The good Samaritan got a towel and approached the man, Keith Dean, in order to try and cover him up, but Dean punched the witness in the face and snatched his watch.

When HPD officers arrived to the scene, they found Dean on a Metro train. He was armed with a can of pesticide he had taken from a Metro worker.

The suspect began to spray one of the officers with the pesticide as he approached him.

One officer managed to get a wand away from the suspect, then asked him to drop the can.  That is when Dean rushed the officer and slapped him in the face, police said.

At that point, both officers deployed tasers. It took two hits to subdue the man, who was then taken into custody.

Dean was charged with two counts of assault on a public servant.