HOUSTON — The search continued Monday for three possible suspects who forever changed a southeast Houston father’s life after the victim had both his legs amputated as a result of injuries endured during a vicious carjacking over the summer.

Samuel Bonilla, who has a 2-year-old son, was shot at least six times in the left side of his body while being mugged July 21 outside his home at the Green Arbor Apartment Homes on Sabo Road. Investigators said Bonilla’s attackers were armed with both a .45 caliber and a 9mm gun.

Bonilla was parking his car at around 11:40 p.m. when an armed man approached him as he was stepping out of the vehicle. Police said the alleged robber fired his weapon without warning, hitting Bonilla, before being joined by two other suspects.

Investigators said the victim managed to get out of his car and tried to run away, but he collapsed a few feet away from the vehicle. That’s when police said the trio stole Bonilla’s wallet, car keys and cell phone. The men then jumped into the victim’s dark gray 2018 Toyota Camry and drove off, officers said.

When emergency services arrived, Bonilla was rushed to the hospital and into surgery. Doctors were forced to remove both his legs as a result of the gunshot wounds.

According to police, the car was found hours later at about 4:20 a.m. inside Margaret Jenkins Park. The vehicle was completely burned and no evidence was found inside the vehicle, officers said.

Bonilla and the Houston Police Department held a press conference Monday to share the latest findings of the investigation, during which they released a composite sketch depicting one of the suspects.

While he is grateful to have survived the attack, Bonilla said he is faced with overwhelming hospital bills as he doesn’t have sufficient medical insurance. Due to his injures, officials said he was forced to quit his job as a waiter.

Through tears, the young father also explained how he will never able to play with his child the same way ever again. 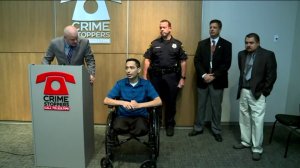 The second suspect is around 5 feet 5 inches tall and about 15 years old.

Police said the third suspect, who was armed with a gun, is of a similar height and weighs about 140 pounds. He is believed to be around 24 years old with dreadlocks.

Crimes Stoppers of Houston is offering an up to $5,000 reward for information leading to charges or an arrest in the aggravated robbery case. Anyone with information is asked to call 713-222-TIPS.

Biden says Walker doesn’t deserve to be in the Senate

Biden says Walker doesn’t deserve to be in the Senate

University of Houston developments a vaccine that …

Tanks for Watching word of the day is LOVE – Enter …

Arrest made in Takeoff killing

University of Houston developments a vaccine that …

Tanks for Watching word of the day is LOVE – Enter …

Fully charging a Tesla in Texas is cheaper in the …

What to do if you lose traction on wintry roads

What roads will close for the Thanksgiving Parade?

12 best Elf on the Shelf accessories

Best gifts for a best friend

No charges expected in fatal crash at post office

The Chainsmokers are coming back to RodeoHouston …