HOUSTON— The Greater Houston Coalition For Justice and concerned community members held a press conference Thursday to speak out about the shooting of Ricardo Llamas.

Llamas was in a flea market parking lot on March 26, 2017 when he was shot seven times by Harris County Sheriff’s Deputy Christopher Mook.

Mook claimed that Lllamas tried to run him over, police say.

Photos taken from the scene show that Mook fired 15 bullets into the driver’s side door of Llamas’s vehicle, which was 15 feet away at the time of the shooting.

In a sworn statement, Mook wrote, “I lost my footing when I stepped backward and I was concerned about falling… Not knowing if the if the driver was going to hit me  or run me over…aimed my firearm at the driver side “A pillar” of the Jeep. I discharged bullets from my weapon until I had a malfunction.”

Llamas survived his gunshot wounds, but was later charged with assault on a public servant and shooting details were never turned over or investigated by a Harris County grand jury.

The case was allegedly rushed to trial where it was dismissed due to a hung jury.

Mook was then forced to retire.

“Everyone should be treated fairly under the law,” said Johnny Mata, acting chairman for Greater Houston Coalition For Justice. “Mr. Llamas should not be retried after a hung jury and the deputy was untruthful at trial.”

The Coalition also wants to point out  Mook’s Facebook page, which shows him wearing a Captain America shirt under his uniform. 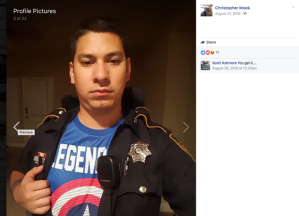 The Coalition claims that Mook sanitized his social media pages by removing all of the photos of him with artillery and changed it to highlight his family.

“It appears Mr. Llamas is being railroaded by the DA’s office and Sheriff, as now the DA’s office is retrying a 5-7 hung jury case and the Sheriff has refused to finish the Internal Affairs investigation until after the trial is complete,” said civil rights lawyer Randall Kallinen. “It appears law enforcement is getting special treatment.”

The District Attorney’s Office has not released a statement at this time.

Is the Fleur-de-lis branded with a racial past?

General Colin L. Powell, 84, former U.S. Secretary of State and Chairman of the Joint Chiefs of Staff, has died due to COVID-19 complications

Mexican man may have the world’s longest penis