HOUSTON -Maleah Davis’ stepfather, 26-year-old Derion Vence, is being charged with tampering with evidence, namely a human corpse. His bond is set at $1 million. He is expected to appear in court Monday morning.

The four-year-old girl was reported missing on May 4 and still hasn’t been found. Police say no remains have been found, but they did find blood evidence in Vence’s apartment that is linked to Maleah.

They also have evidence that Vence was seen carrying a full laundry basket from the apartment. When the car Vence was driving was found Thursday in Missouri City, a laundry basket and a gas can were found in the trunk.

Vence’s story has had gaps in it from the start. He claimed he was knocked unconscious Friday before last in northeast Harris County and came to the next day in Sugar Land and reported what he said was an abduction when he got to Methodist Hospital.

Now police have surveillance video of someone in the family’s vehicle, the silver Nissan Altima, dropping Vence off at the hospital.

Vence was taken into custody on Saturday at a relative’s home in Sugar Land.

This story has been heartbreaking those that have watched it unfold over the past week and a half. Dozens of people, some with the Houston’s Unsolved Homicides group, spent the day searching for Maleah yesterday in the Alief area, which is near the family’s apartment.

“It’s very emotional for the city. So many families contact us everyday to try to come out to help because this little girl has not been found. Where is she at? Where is the princess?  Where can we find her at?  There are so many loopholes in these stories,” explained James Marsden with Houston Unsolved Homicides.

If you have any information on this case or know where Maleah is, you are asked to call police. Authorities are also looking for information about this gas can that was found in the trunk of the car Vence was driving.  Police would like to speak to the person that sold it to Vence. 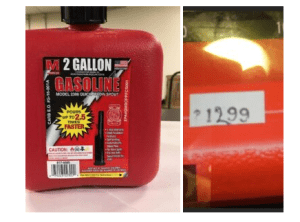 LAKE BUENA VISTA, Fla. (AP) - Russell Westbrook of the Houston Rockets said Monday that he has tested positive for coronavirus, and that he plans to eventually join his team at the restart of the NBA season.

Westbrook made the revelation on social media. As recently as Sunday, the Rockets believed that Westbrook and James Harden - neither of whom traveled with the team to Walt Disney World near Orlando last week - would be with the team in the next few days.

FAYETTEVILLE -- On Friday, the Pac-12 joined the Big Ten in going to a conference-only season this fall.

Among the Power 5 that leaves the SEC, Big 12 and ACC with decisions to make. The SEC will hold a meeting on Monday regarding its status, but has said previously it wants to wait until later in July to make a decision. The meeting on Monday was scheduled before the Pac-12 made its announcement on Friday. The Big 12 and ACC have also stated plans for a late July decision.

The body of missing actress Naya Rivera was found floating in Lake Piru on Monday morning, days after she went missing during a boating trip with her young son and was presumed dead, Ventura County officials said.

“We are confident the body we found is that of Naya Rivera,” Ventura County Sheriff Bill Ayub said, delivering the grim news at an afternoon news briefing.