Perryville, MD — 24 people have been displaced and four people were taken to the hospital following a massive condominium fire early Sunday morning.

The 18-unit condo building at Owens Landing Court caught fire just before 3 a.m. and it took nearly 100 firefighters to extinguish the flames.

Firefighters were able to break through the three-alarm fire to save a 93-year-old woman who was stuck on the third floor of the building. She was airlifted to the hospital and officials have not released her condition at this time. 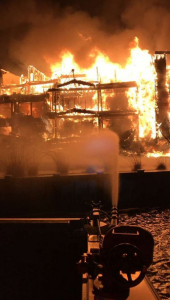 Three other people were taken to the hospital for minor and non-life threatening injuries.

Officials say it took nearly four hours to bring the fire under control and the building is considered to be a complete loss. There is also heat damage to the two buildings surrounding the one that caught fire. There are seven total buildings in the Owens Landings complex.

An early assessment by investigators indicates there is an estimated $2 million worth of damage caused by the fire.

Investigators are still trying to determine what caused the fire.