At least 70 people, including at least 10 children, have been killed in what is suspected to be one of the deadliest chemical attacks in Syria in years, activist groups say.
Airstrikes hit the rebel-held city of Khan Sheikhoun in Idlib province on Tuesday morning, giving off a "poisonous gas," according to Anas al-Diab, an activist with the Aleppo Media Center. 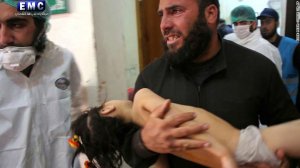 The attack, which has been blamed on the Syrian regime by activists and condemned by international leaders, has reportedly left hundreds injured.

Doctor: 'I've never seen anything like it'
Many of the casualties came as a result of asphyxiation, local doctors say. Videos circulating on social media purporting to be from the scene show people, including children, who appear unresponsive; others are seen struggling to breathe or wearing oxygen masks. 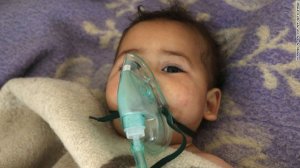 A doctor in a hospital close to Khan Sheikhoun told CNN: "Today around 7:30 a.m., about 125 injuries arrived to our hospital. Twenty-five of them were already dead, 70% to 80% of the wounded people were kids and women.
"The symptoms were pale skin, sweating, narrow or pin-eye pupils, very intense respiratory detachments. Those symptoms match the usage of sarin."
The doctor, who cannot be named for security reasons, said tests were needed to identify whether sarin gas was to blame. 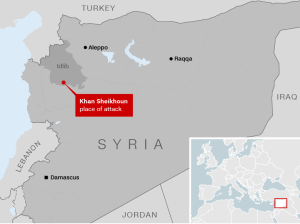 Another doctor, Fares al-Jundi, rushed to the hospital after the airstrikes.
Choking with emotion, Jundi told CNN: "I've never seen anything like it, beyond description."
He estimated there were about 500 wounded people. They covered the floors of the entire hospital, from the patients' rooms to the operating rooms and the corridors.
The doctor described how whole families were killed, mothers and their children. They died of asphyxiation; foam covered their mouths. Many died suddenly, he said.
"I believe this horrible memory will stay with me for the rest of my life." 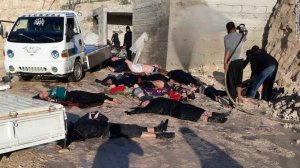 Chaos, confusion at the scene
Hadi al Abdullah, a citizen journalist, arrived at the scene two hours after he says a single gas rocket hit the town.
Suffering from blurred vision, a splitting headache and lethargy -- common side effects of a nerve gas attack -- Abdullah told CNN the scene was utter chaos. Whole families died in their houses, and in the streets, children risked exposure looking for their parents.
At first, people were unaware it was a gas attack, Abdullah said. People who rushed to help others were also overtaken by the gas. These included several White Helmets, who had to be rescued by others from the group, also known as the Syrian Civil Defense.
The Aleppo Media Center put the death toll from the attack at 70. However, the chaotic situation on the ground has led to conflicting numbers. The UK-based Syrian Observatory for Human Rights said at least 58 were dead, including 10 children. The High Negotiations Committee, an umbrella opposition group, claimed the death toll could be as high as 100. 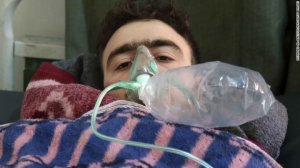 Syrian military denies responsibility
The Syrian army "categorically denies the use of chemical and poisonous material in Khan Sheikhoun" in Idlib province Tuesday, the General Command said in a statement.
"The Syrian army holds the terrorist groups and those supporting them responsible for the use of chemical and poisonous material and for the careless wasting of innocent civilians' lives to achieve their despicable goals and agendas," the statement said.
Earlier, state-run media had reported an explosion at a rebel "poison gas factory."
The nature of the substance used in the attack has not been officially confirmed, and it is unclear whether the planes involved were Syrian.
In an apparent reference to the crisis, two state-run Syrian media outlets reported an explosion at a "rebel poison gas factory" in the countryside of Idlib province, implying that it was an accident related to rebels building chemical weapons.
Idlib province is largely controlled by an alliance of rebel forces and is regularly targeted in airstrikes by the Syrian government and its ally, Russia.
The Russian Defense Ministry said none of their jets carried out airstrikes Tuesday in the area of Khan Sheikhou, according to a ministry statement carried by state-run news agency Tass. 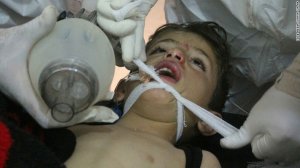 The Syrian Coalition, an umbrella opposition group, referred to the suspected chemical attack as a "crime similar to that in Eastern Ghouta in 2013 that the international community allowed to pass without accountability or punishment."
The tweet was in reference to a 2013 chemical attack on the Damascus suburb of Ghouta, which was blamed on the Syrian regime and prompted President Barack Obama to threaten military action at the time.
If Tuesday's reports of a chemical attack by the regime are confirmed, experts say it could be the biggest since Ghouta.

An emergency United Nations Security Council session has been scheduled for Wednesday morning, according to US Ambassador to the UN Nikki Haley. French Foreign Minister Jean-Marc Ayrault, who called for the meeting, described the attack as a "despicable act."
Speaking at a press conference with his German counterpart, UK Foreign Secretary Boris Johnson suggested the attack could amount to a war crime.
"If this were to be proved to have been committed by the Assad regime, then it would be another reason to think they are an absolutely heinous outfit, that is, it is a war crime," Johnson said.
Russian President Vladimir Putin and Turkish President Recep Tayyip Erdogan had a phone conversation, during which Erdogan called the attack "cruel" and "unacceptable," Turkey's official news agency Anadolu reported.
Turkish Foreign Minister Mevlut Cavusoglu tweeted: "Idlib attack is a crime against humanity. Those saying Syrian people will decide Assad's future: no people will remain if attacks continue.

Idlib attack is a crime against humanity.Those saying Syrian people will decide Assad's future: no people will remain if attacks continue.

The Organization for the Prohibition of Chemical Weapons said it was "seriously concerned" about the reports from Idlib and said a fact-finding mission had been launched into the attack.
In a series of tweets, Israeli Prime Minister Benjamin Netanyahu said he was "shocked and outraged." "There's no, none, no excuse whatsoever for the deliberate attacks on civilians and on children, especially with cruel and outlawed chemical weapons," he wrote in one.

When I saw pictures of babies suffocating from a chemical attack in Syria, I was shocked and outraged >

White House press secretary Sean Spicer said the chemical attacks are a "consequence of the past administration's weakness."
"President Obama said in 2012 he would establish a red line against the use of chemical weapons and then did nothing," Spicer said in an off-camera briefing. "The United States stands with our allies across the globe to condemn this intolerable act."

US Sen. John McCain called for President Donald Trump to send a strong signal to Syrian President Bashar al-Assad that the attack will not be tolerated.
Referring to the 2013 chemical attack, McCain told CNN: "We've seen this movie before, it was when Barack Obama said they would have a red line, they crossed it and he did nothing. Bashar Assad and his friends, the Russians, take note of what Americans say."
The Ghouta attack prompted Obama to ask Congress to authorize military action against Syria in 2013.
Shortly after, Syria agreed to a Russian proposal to give up control of its chemical weapons, leading Obama to retreat from threats of military action.
McCain called for Trump to say "we're going to arm the Free Syrian Army, we're going to dedicate ourselves to the removal of Bashar al-Assad, we're going to have the Russians pay a price for their engagement."

Haid Haid, a Syrian columnist and researcher, told CNN that in his view, the United States is "not interested in any way challenging the rule of Assad."
"The regime has been systematically using small scale (chemical) attacks over a long time in order to normalize the use of those attacks," said Haid, an associate fellow at Chatham House.
"Once the regime is sure that the attacks won't trigger any sort of reaction from the international community, I believe the regime will start increasing those attacks."
He added: "The attack we are discussing right now is bigger in scale than many other attacks in the past few years, and it's so far the biggest since the one in 2013, which means that the regime is in a way increasing the scale of the attacks in order to test the waters to see if the international community will do anything to address what's happening inside Syria."
Since the war began in 2011, an estimated 400,000 Syrians have been killed, according to figures issued by the United Nations last year.