Their poses are typically stern and stoic, mimicking sepia-toned editions that date back to the 1800s.

They do not typically raise a clenched fist in the air. 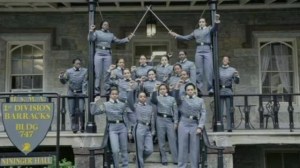 So when a photo of 16 female, African-American cadets making the gesture was posted online last month, it raised eyebrows at the elite training academy, which produces many of the nation’s future military leaders.

The photo circulated among students over social media, said a school representative. Soon, it grew into an on-campus controversy — a potential break in the taboo against advocacy by military personnel.

The photo gained national attention last week when a blogger popular among some in the military wrote about it after multiple cadets sent in the photo, according to the blog’s author. In posts on his blog and on his Facebook account, John Burk called the image a “completely unprofessional” reference to the Black Lives Matter movement. The Facebook post drew hundreds of comments and was shared more than 1,400 times.

In days since, scores of alumni have lined up in support of the young women, who have not spoken publicly about the photo or been identified by West Point. Meanwhile, the school said it is investigating whether the photo violates the military’s restrictions on political expression.

Mary Tobin is a graduate of the academy who said she is a mentor to some of the women in the photo and has spoken to them since the inquiry was launched. She said the pose had nothing to do with politics.

“They weren’t doing it to be aligned with any particular movement or any particular party. It was, ‘We did it and we did it together,'” Tobin said, referring to their completion of four years at West Point.

Under scrutiny is an “Old Corps Photo,” as the graduation tradition is referred to at the school. It shows the African-American women in sharp, gray uniforms, each with a fist held at face level.

It was taken as part of a series, as is custom for various groups in the graduating class. The cadets in the photo posted it to Facebook along with other stills from the shoot, alumni who know the women said.

Sue Fulton, a West Point alumna and member of the school’s board of visitors who said she is friends with some cadets in the picture, saw the group’s photos and shared her favorite one. It featured the same group of 16 women in a more standard Old Corps pose, each looking serious and gripping her ceremonial saber.

“THIS. Fearless, flawless, fierce. Ready,” Fulton wrote. That photo was retweeted by Patrick Murphy, acting secretary of the Army.

Meanwhile, the photo of the cadets with their hands raised in a knuckled salute was making the rounds in different circles.

After gaining attention on social media, the raised-fist photo made its way to academy officials, who on April 28, opened an inquiry, said Lt. Colonel Christopher Kasker, spokesman for the school.

Kasker did not specify whether the inquiry could result in disciplinary action for the cadets, who were described by Fulton and others who knew them as athletes and campus leaders.

CNN’s attempts to reach the women in the photo for comment have not been successful.

A break with tradition?

According to Army Command Policy, soldiers — including cadets at the academy — may “register, vote, and express their personal opinion on political candidates and issues, but not as a representative of the Army.”

Further guidelines prohibit soldiers from joining groups, deemed extremist, that “promote or threaten the unlawful use of force or violence.”

“Enforcement of this policy… is vitally important to unit cohesion and morale, and is essential to the Army’s ability to accomplish its mission,” the policy reads.

The clenched fist salute, most famously associated with the Black Power movement of the ’60s and ’70s, has been used as an expression of solidarity within countless causes. Beyoncé and her backup dancers notably made the gesture in a performance at this year’s Super Bowl halftime show.

The gesture is also reminiscent of the iconic sports photograph from the 1968 Mexico Olympics in which U.S. sprinter Tommie Smith stood defiantly during his medal ceremony, head bowed, his black-gloved fist thrust into the air. Behind him, fellow-American John Carlos joined with his own Black Power salute, an act aimed at highlighting segregation and racism.

‘About personal triumph, not about politics’

The young women in the photo comprise 16 of 18 female African-American cadets set to graduate later this month — out of a class of more than 900, said Kasker, the school spokesman.

For West Point alumna Tobin, an African-American woman who now works in Washington, training as a minority at West Point in the early 2000s carried an extra burden.

“It’s part of the old adage that black people are taught: We have got to work twice as hard,” she said.

A post she shared on Facebook on Thursday, titled “This is Not About a Fist,” was shared hundreds of times and drew dozens of comments in support.

“I refuse to allow my young West Point sisters to be railroaded, ostracized, demonized, degraded, and humiliated without speaking up on their behalf,” she wrote. “They are proud. Point blank. And while I would not have advised them to display ‘the fist’ while taking this traditional picture, my advice would’ve been solely rooted in the fact that we exist in a very racially and politically charged environment and not everyone will understand what you meant.”

In another blog post, alum Sam Jackson, a civilian pastor who lives in Wisconsin, said when he attended the academy in the 1980s, minorities were expected “to help the military sort out their racial problems.” That expectation, though, meant he was left to face racial slurs on his own, Jackson said.

“It was an ongoing ‘Jackie Robinson’ type of expectation, with the acceptance of the assignment largely assumed, and not offered. … Demonstrating racial pride in such an environment can be tricky, and protesting racial mistreatment can seem totally off limits,” he wrote.

Fulton, the school board member, urged people not to jump to conclusions.

“For all their training, cadets sometimes do things without thinking. Cadets sometimes act out of their youthful exuberance without understanding some of the consequences,” said Fulton, who is not involved in the investigation and said she was speaking outside of her official capacity.

She added, “This is about their personal triumph, not about politics.”

‘Saved by the Bell’ star Dustin Diamond diagnosed with cancer

Have you seen this teen?