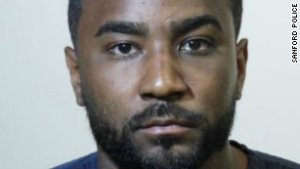 Gordon’s girlfriend went to the Sanford Police station Saturday and reported that she was hit by her live-in boyfriend, police said in a statement.

Officers found Gordon at a local club house near the couple’s home and took him into custody. He was arrested on domestic battery and false imprisonment charges, according to Sanford Police.

Last year, Gordon was ordered to pay $36 million to the estate of his late girlfriend Bobbi Kristina Brown, the only child of the late Whitney Houston and singer Bobby Brown.

He was found legally responsible for Brown’s death after she was found unresponsive in the bathtub of an Atlanta home the couple shared on January 31, 2015.

She remained in a coma until she died six months later.

An autopsy declared that drug intoxication and immersion in water were the cause of the pneumonia and brain damage that ultimately led to her death.

Gordon has not been charged criminally in the case. He failed to appear for two hearings in the civil case against him regarding Brown’s death, and her family won by default.

The ruling forces Gordon to pay any of his future earnings to the estate of Brown.