NEW YORK — Police officers in New York were up in arms Sunday night after learning that a Brooklyn man was released by a judge. 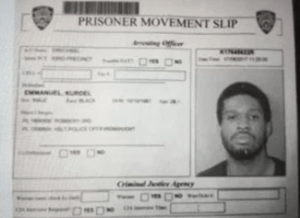 Kurdel Emmanuel was released one day after he tried to wrestle a gun from a female officer’s holster in Brooklyn’s 83 precinct, according to our New York affiliate Pix11. The female cop was able to overtake the man and arrest him.

The incident happened three days after another female officer, Miosotis Familia of the 46th Precinct in the Bronx, was assassinated as she sat in a Mobile Command Unit on Morris Avenue and East 183rd Street.  The shooter, Alexander Bonds,  had ranted on social media that he wanted to go after police officers.

A poster was put out Sunday by the 40th Precinct in the Bronx, issuing an Officer Safety Alert for 29-year-old Kurdel Emmanuel, stating “Have Arrested.”  Police in Brooklyn had charged Emmanuel with robbery and assault in the 2nd degree. He had allegedly attempted to grab the Brooklyn officer’s gun in the waiting area of the 83rd Precinct on Saturday.  Emmanuel had gone to the precinct to ask about the status of a friend who got arrested.

Emmanuel has a history of mental issues, just like Bonds, who had been released from a psychiatric emergency room several days before he fatally shot Familia.

The Brooklyn District Attorney requested Emmanuel be held on $250,000 bail, but Judge Loren Bailey-Schiffman released the suspect on his own recognizance.

“This is a sickening display of carelessness or callousness by a judge who should be fully aware of similarity in the circumstances between this thug’s crime and the assassination of police officer Miosotis Familia,” Lynch said. We have seen too often the unbalanced act out against NYC police officers with deadly effect.

The announcement came Monday after the U.S. government told the automaker it had to recall 6 million of the vehicles in the U.S.

About 1 million Americans a day packed airports and planes over the weekend even as coronavirus deaths surged across the U.S. and public health experts begged people to stay home and avoid big Thanksgiving gatherings.

And the crowds are only expected to grow. Next Sunday is likely to be the busiest day of the holiday period.

AUSTIN (KXAN) — The first Texans to receive the COVID-19 vaccine will be health care workers and other vulnerable populations. Gov. Greg Abbott expects the first vaccine shipments to come as early as December, according to a release from Abbott's office and the Texas Department of State Health Services.

The "guiding principles" for the distribution process, which were established by the state's Expert Vaccine Allocation Panel, were released on Monday by Abbott's office.