AMMAN, Jordan (CNN) — For the first time since a United States-led international coalition began airstrikes against the extremist group ISIS, a coalition pilot has been captured.

The family of Jordanian Moaz al-Kasasbeh is pleading that the militants release him.

Speaking with CNN Arabic, the pilot’s brother Jawad al-Kasasbeh asked that ISIS “be supportive of our brother Moaz and to be merciful on him, please send him back to us. He is just a soldier who is following orders and has no authority.”

Moaz al-Kasasbeh is a “pious man who prays and fasts and he always flies with his Quran with him,” his brother said.

Al-Kasasbeh’s capture is a frightening reminder that it could have been any pilot downed and taken, including one from the United States which is flying F-16s in the area.

Jordan is one of several key nations helping the United States and other Western nations degrade and destroy ISIS which has cut a murderous path through Iraq and Syria in its ultimate quest to establish a caliphate, or Islamic state, across those countries.

In one image, four men appear to pushing a dazed and bloody man through shallow water, perhaps to shore.

A source in Jordan’s armed forces said that the pilot was downed carrying out a mission Wednesday around the northern Syrian city of Raqqa, which ISIS controls and has made its de facto capital, according to Jordan’s official PETRA news agency.

“Jordan holds the terror organization and those who support it responsible for the safety of the pilot and the preservation of his life,” the source said.

“The Jordanian pilot Kasasbeh is a model of heroism and all of us stand with his family and his colleagues in-arms,” said Jordanian government spokesman Mohammad Al-Momani in a statement emailed to CNN.

Later, Al-Momani told CNN, “It appears the plane was shot at from the ground, but this is still just speculation.”

A senior U.S. defense official, however, told CNN there is no indication so far that the Jordanian F-16 was shot down, and coalition and Jordanian authorities 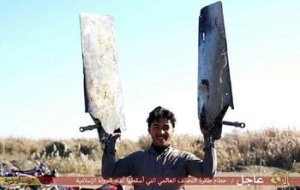 The coalition air campaign has recently stepped up its attacks on Raqqa, located on the banks of the Euphrates river. In the beginning of December, for example, the coalition hit the city with 30 air strikes in a single night. There was one coalition airstrike in the area on Wednesday and one on Monday, according to the U.S. military.

“We understand the enormity of this incident but we also acknowledge that our national choice … to fight those terrorist organizations that threaten Jordan’s security,” Al-Momani said on Jordanian television. “Jordan participated in this war acknowledging that this war will have casualties.”

Bordering Syria, Iraq and Israel, Jordan has been a critical regional player in the coalition and has a history of working with Washington.

Though the United States has led the coalition, President Barack Obama has maintained that there will be no U.S. troops on the ground.

But the Defense Department last week announced that up to 1,300 more U.S. troops, including approximately 1,000 soldiers from the Army’s 82nd Airborne Division, will begin to deploy to Iraq in late January.

The U.S. led-coalition has relied tremendously on a number of other countries to help militarily as well as to help legitimize the effort internationally.

Some of those key regional allies include Turkey, Saudi Arabia, the United Arab Emirates and Jordan. The coalition has been conducting nearly constant airstrikes against ISIS in Syria since September, an effort that began weeks after first going after the group in neighboring Iraq. In that period, the coalition has said it landed several strikes that have damaged ISIS infrastructure, equipment and fighting capacity.

While Iraq has posed complex battle demands, Syria has its own set of complications.

The country has been ravaged by years of civil war as forces try to unseat Syria President Bashar al-Assad. Those forces are not only fighting al-Assad now, but trying to keep up the strength to fight back ISIS.

One of the largest questions looming now is what ISIS will do with Moaz al-Kasasbeh.

The beheadings of hostages, including American journalist James Foley, was one of the things that spurred the United States to step up its fight against ISIS.

Those are just some of the many atrocities blamed on the Sunni extremist group, committed during its quest to create a caliphate — which it calls the Islamic State — under its strict form of Sharia law. ISIS has tried to justify its raping and enslaving of women and children, not to mention mass killings of civilians, as part of its campaign to purge “nonbelievers.”

The Jordanian military source cited by PETRA noted ISIS’ past and wondered about the fate of the captured of the F-16 pilot.

“It is well-known that this organization does not hide their terrorist schemes,” the source said. “And they have carried out many criminal acts of destruction and killing of innocent Muslims and non-Muslims in Syria and Iraq.”

Houston Scavenger Hunt: Here’s 9 reasons to play…such as the $1,000 prize!