(CNN) — The death of Tamir Rice, a 12-year-old boy who was shot last month by a Cleveland police officer who authorities say mistook the child’s air gun for a real firearm, has been ruled a homicide, the Cuyahoga County Medical Examiner’s Office said Friday.

The November 22 shooting outside a Cleveland recreation center is under investigation, and Tamir’s family has filed a lawsuit against two officers and the city over his death.

The homicide finding indicates that Tamir was killed by the police officer, rather than dying accidentally or by natural causes or by suicide. Medical examiners’ homicide findings make no comment on whether the killing constitutes a crime.

The cause of death was a “gunshot wound of the torso with injuries of major vessel, intestines and pelvis,” according to paperwork provided by Christopher Harris in the medical examiner’s communications office.

Rice was pointing a pellet gun at people outside the recreation center before he was shot, police say. A witness called 911 to say that a black male — “probably a juvenile” — was pointing “a pistol” at people, but added twice that the gun was “probably” fake. 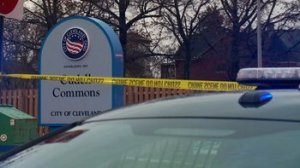 Two officers arrived in a police car. Within two seconds of exiting the car, Officer Timothy Loehmann shot Tamir, and the boy died the next day, police say.

Police have said that Loehmann opened fire after Tamir reached for the gun in his waistband and that an orange tip indicating the gun was a toy had been removed.

Tamir’s mother, Samaria Rice, has said she didn’t allow her son to play with toy guns, and one of his friends gave the air gun to him.

Loehmann, 26, and the car’s driver, Officer Frank Garmback, 46, are on paid leave as the investigation is conducted.

Caeleb Dressel is pretty much invincible when he has a lane to himself.

But give him a deficit of more than 8 seconds?

While all eyes are on Tokyo, nearby the largest US overseas naval base stands ready

TOKYO (KSEE) — The Tokyo Olympic Games are in full swing, and while most of the attention might be on the fields and courts, the largest US overseas naval base in the world is only 43 miles away.

Commander Fleet Activities Yokosuka, or CFAY, has a long history in Japan.

Biden to announce new eviction ban due to COVID spread

WASHINGTON (AP) — The Biden administration will announce a new 60-day eviction moratorium that would protect areas where 90% of the U.S. population lives, according to three people familiar with the plans who insisted on anonymity to discuss the forthcoming announcement.

The Centers for Disease Control and Prevention has identified a legal authority for a new and different moratorium that would be for areas with high and substantial increases in COVID-19 infections.

‘Mama has no energy, Dada’s resting,’ Family battles COVID-19 together in hospital

Officer dead, suspect killed after burst of violence outside Pentagon

No masks, more than 60,000 fans: Doctors concerned ahead of massive Garth Brooks concert

US sends more than 110M COVID-19 vaccines to 60 countries

The fastest-selling car in each state in June

Houston weather – cold front in sight after a steamy weekend

Houston weather – hot, humid, spotty rain and a preview of the tropics in August

Summer travel boom not just seen in the air, but also on the road

Jet fuel shortage hits US airports in the West

Average US gas price rises 2 cents per gallon to $3.22