NEW YORK—Celebrated gossip queen Wendy Williams gave her audience quite a scare Tuesday, when she suddenly passed out during a taping of her talk show.

Williams was in the middle of a contestant giveaway when she began to slur her words and stumble. Williams became visibly scared as she tried to catch her balance before collapsing to the ground.

The show producers and crew members can be seen rushing to help the part-time HSN clothing designer before cutting to commercial break.

Williams returned from commercial break and explained that she had become overheated inside her Statue of Liberty Halloween costume.

“That was not a stunt, I overheated in my costume and I did pass out!” Williams said. “But you know what? I’m a champ and I’m back.” Williams finished out the remainder of the show and no further issues have been reported at this time.

Fans were quick to respond on social media. Some wondered if Williams had suffered a stroke. Others thanked Williams for what will become the greatest GIF of all time.

Pretty much the same reaction the real statue had when Trump became President! pic.twitter.com/Fv1aFR5J7J

I didn't find any humor in that video of Wendy Williams fainting/having a stroke on tv. They said she's fine but that simply wasn't funny.

Wendy Williams fainting will probably be one of the best GIFs ever made. pic.twitter.com/Wr0b3QH6FO

So who's gonna be the first to start the Wendy Williams challenge? pic.twitter.com/GrQ81NwcL2

Was Wendy Williams trying to say “our first guest”?? It came out as “our first caress”. I don’t want to jump the gun here, but it seems as though she just had a stroke. Sending positive thoughts her way.

Other fans were not so forgiving and hinted at Williams former drug addiction as the reason behind the fall.

I'm not trying to make fun of people with serious issues, but Wendy Williams has been skinny for a while, She might be on dem drugs again

#WendyWilliams I'm sorry but the first thing you do when you're over heated is Fan Yourself… sis u had a mild stroke… or Drugs impact!!

Wendy Williams has openly said she's done a lot of drugs, we know what's up

Williams has been very open about her previous drug addiction but is also no stranger to falling. Williams describes herself as being clumsy, having two left feet and knocked knees. In 2015 Williams was in Houston for her “Sit down comedy tour” when she fell off the stage into the audience. Williams stated that she misjudged the length of the stage and did not realize how high it was.

Williams knack for falling eventually led her to establish the Wendy Williams Fall of Shame to highlight other celebs who have taken a major spill in public. Celebrity members include Cameron Diaz, Jimmy Fallon, Kevin Hart, Zac Efron, Meghan Trainor and Boris Kodjoe to name a few. 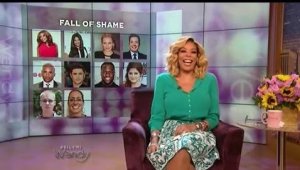 Correa prepares for what could be final run with Astros