The longtime star of “Bonanza” and “All My Children” legend David Canary died of natural causes earlier this month, according to an obituary from his family.

Canary died at The Greens at Cannondale in Wilton, Connecticut, on November 16.  He was 77 years old.

Canary’s life could have taken a far different path — the Denver Broncos gave him an offer that he turned down to pursue acting. He appeared in multiple Broadway productions before serving in the Army for two years.  After his stint in the military, Canary headed west and landed a gig acting alongside Paul Newman in “Hombre” among others.

For many, Canary became a household name during his 26 years playing twin brothers Adam and Stuart Chandler on “All My Children.”

He won five Outstanding Actor Awards and 16 nominations before retiring from acting in 2010.

Canary is survived by his wife, Maureen, his son, Christopher, and his daughter, Kathryn.

Private funeral services have been arranged at the Bouton Funeral Home in Georgetown, Connecticut.

Instead of flowers, the family is asking people to make donations to the Alzheimer’s Association under the “David Canary Memorial Fund.” 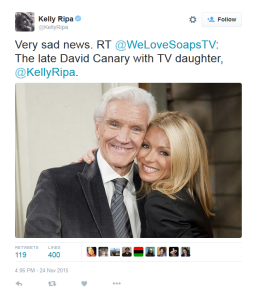 The 19 highest-paying careers in architecture and engineering