WASHINGTON (CNN) — President Barack Obama announced Monday that Defense Secretary Chuck Hagel will step down from his position as soon as the Senate confirms a successor.

Hagel, who has served as Defense secretary since February 2013, was forced out by President Barack Obama, CNN confirmed from several sources.

During his remarks from the White House, however, Obama praised Hagel as an “exemplary” Defense secretary, calling him critical to a number of national security accomplishments during his tenure, and characterized Hagel’s resignation as his own choice.

“If there’s one thing I know about Chuck it is that he does not make this or any decision lightly,” Obama said from the State Dining Room. “This decision does not come easily to him.”

However, Arizona Sen. John McCain, the expected incoming chairman of the Armed Services Committee, said on local Arizona radio station KFYI 550’s “The Mike Broomhead Show” that he spoke with Hagel last week and the Defense secretary was “frustrated.”

“They’re gonna say well it was time for a change and all that…but I can tell you he was in my office last week, he was very frustrated,” McCain said, with a lack of strategy to combat ISIS, help the Ukranians and what McCain called “a lack of U.S. influence…unknown in history.”

McCain said, despite the fact “White House people are leaking, ‘Well, he wasn’t up to the job,’ believe me, he was up to the job” — and that the real issue was the White House itself.

“It was the job that he was given where he really was never really brought into that real tight circle inside the White House that makes all the decisions,” he said.

Throughout the day Monday, administration officials continued to insist the decision for Hagel to step down was mutual and had nothing to do with his feelings on the administration’s defense strategy.

Pentagon Press Secretary John Kirby told CNN’s Christiane Amanpour that “the secretary’s decision to resign has nothing to do with Iraq policy or strategy.”

“He’s very much a strong advocate for the policy and the strategy that we’re executing there,” he said.

He added that Hagel’s resignation doesn’t hint at any “major changes” to the nation’s strategy in Iraq, including the president’s decision not to put boots on the ground there in a combat role.

Behind the scenes, administration officials told CNN there were a series of discussions over the past several weeks with the President, initiated by Hagel. The talks covered a “broader discussion of national security for the next two years,” a defense official said.

The two came to realize that “a different focus was needed and a change is in order,” the official added. “It is wrong to conclude that this was a protest by Hagel or it was over policy differences.”

The New York Times first reported Monday morning that Obama asked Hagel to step down last Friday, seeking to reassure critics of the President’s foreign policy with the move.

The move, White House officials told the Times, was meant to acknowledge that the new national security threats facing the nation — most notably the rise of the Islamic State in Iraq and Syria — call for a different kind of leadership in the Defense Department.

“The next couple of years will demand a different kind of focus,” an administration official told the paper.

Rhode Island Sen. Jack Reed, a former paratrooper, was initially in the mix, but his spokesman said in a statement that he’s not interested in the job.

“Senator Reed loves his job and wants to continue serving the people of Rhode Island in the United States Senate. He has made it very clear that he does not wish to be considered for Secretary of Defense or any other cabinet position,” spokesman Chip Unruh said.

But it’s highly unlikely that the confirmation process for Hagel’s replacement will occur before next year when the Republican-led Senate convenes, Senate leadership aides from both parties tell CNN.

A GOP aide said it would be “logistically impossible” to complete it in the two weeks senators expect to be in session in December before leaving for the holidays.

A Democratic aide said that while Democrats are “open” to considering the nomination when they return to session next week, doing so would require consent from Republicans.

“It’s not impossible for this year but would require a nominee before we come back Monday and complete cooperation from Republican leadership, committee members and rank and file,” the Democratic aide said.

The move, White House officials told the Times, was meant to acknowledge that the new national security threats facing the nation — most notably the rise of the Islamic State in Iraq and Syria — call for a different kind of leadership in the Defense Department.

“The next couple of years will demand a different kind of focus,” an administration official told the paper.

At the White House press conference, Hagel thanked the President and his colleagues, pledged to work “just as hard as I have over the last couple years” until his successor is confirmed. And he evaluated his tenure at the Pentagon as a success.

“I believe we have set not only this department, the department of Defense, but the nation on a stronger course towards security, stability and prosperity. If I didn’t believe that I would not have done this job,” he said.

A critic of the Iraq war, Hagel was brought on to oversee withdrawal from Afghanistan and a smaller Pentagon budget than ever before.

Hagel, a former senator of Nebraska, was the last Republican still serving in Obama’s Cabinet and was a Vietnam combat veteran.

Hagel’s tenure was rocky before it even began. 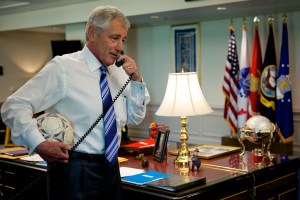 During his confirmation hearings, Hagel drew sharp criticism from pro-Israel Republicans concerned with his opposition to aggressive sanctions against Iran and for his criticism of the Defense Department as “bloated.” His confirmation was filibustered before he ultimately won approval.

And his two years at the Pentagon have been marred by gaffes that occasionally undercut the President and an inability to sell the administration’s national security policy.

He at one point called ISIS an “imminent threat to every interest we have,” contradicting the President’s comments just months before that the group was simply “junior varsity.”

The administration has taken persistent criticism over the past few months as a series of national security crises roiled the nation, and the President’s response was seen by many as flat-footed and inconsistent.

Hagel’s departure has been rumored to be coming for weeks, and as recently as last week he dodged questions about his continued tenure at the Pentagon.

“First of all, I serve at the pleasure of the President,” Hagel told PBS, asked whether he’d continue in the position. “I’m immensely grateful for the opportunity I’ve had the last two years to work every day for the country and for the men and women who serve this country. I don’t get up in the morning and worry about my job. It’s not unusual by the way, to change teams at different times.”

Pressed on whether he felt he still had Obama’s confidence, Hagel said, “Well, I don’t think I would be here if I didn’t. But you’d have to ask him that. I mean I see him all the time.”