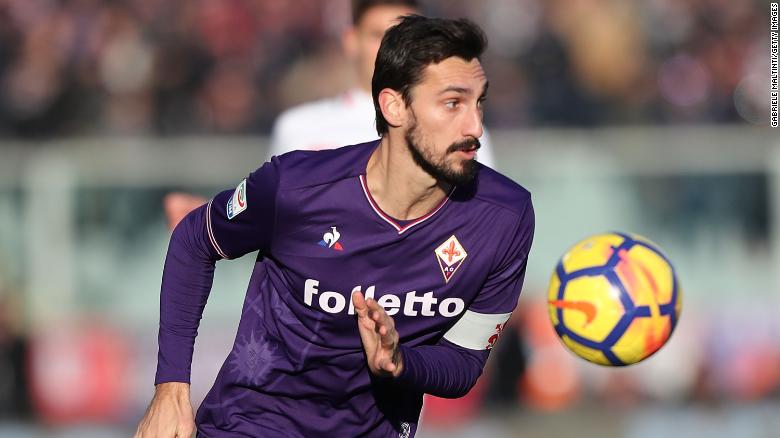 (CNN) — Italy’s top football league postponed its Sunday games to mourn the loss of Fiorentina captain and Italy international Davide Astori, whose team said he died of sudden illness at the age of 31.

“Fiorentina is deeply shocked, and has to communicate that its captain Davide Astori has passed away,” the Florence team said in a tweet. “Because of the terrible and delicate situation, and most of all for the respect due to his family, we make an appeal to everybody’s sensitiveness.”

Additional details were not immediately available. ANSA, the Italian news wire, reported Astori died of “cardiocirculatory arrest” while staying with his Fiorentina teammates at the Best Western Hotel Là di Moret in Udine. Fiorentina was slated to play Udinese on Sunday, one of seven Serie A fixtures postponed for the week.

“Shocked by the tragic news, all the Serie A League family gives the closest support to the family of Davide Astori,” the league said in a tweet.

A lanky fullback with strong aerial ability, the Fiorentina captain and central defender presided over eight clean sheets, or shutouts, for Fiorentina this season. His last goal came in a 5-0 blowout over Hellas Verona in September.

Born in San Giovanni Bianco, about a 90-minute drive northeast of Milan, Astori was capped four times by the Italy Under-18 squad before he began his senior career with AC Milan in 2006. He never took the field for the Italian powerhouse, instead being loaned out to two lower-division teams.

He joined Cagliari in 2008 and spent most of his career there, earning 174 caps, or international match appearances, and scoring three times, before going on loan to Roma in 2014 and then to Fiorentina in 2015.

He joined the latter on a permanent basis in 2016 and made 57 appearances for the Florence squad, scoring three times.

The Italian national team also capped Astori on 14 occasions. He was first named to the Azzurri for a 2010 friendly match against Ivory Coast but remained on the bench for the game. He got on the field in March 2011 for a friendly meetup against Ukraine, which Italy won 2-0.

His lone goal for the Azzurri came in a 2013 Confederations Cup third-place match against Uruguay. Alessandro Diamanti swung a setpiece over goalkeeper Fernando Muslera’s head. It clanked off the post, hit Muslera in the back and trickled toward the opposite post before Astori smashed it home from point-blank range. Italy would go on to win the match on penalty kicks.

MAP: Where COVID-19 cases are in Fort Bend County